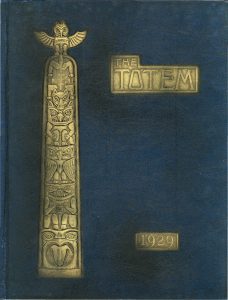 In simpler times when class sizes were only a small fraction of what they are today, we used to be able to fit all students of UBC into the same yearbook! If only there was a book big enough to fit all 60,000 of UBC’s current students now… Here are some of the highlights from the 1929 Totem yearbook, featuring some old parts of campus, a little poetic tribute to nursing, and a few nursing alumni.

The vintage sketches of the campus capture just how long ago UBC was established. The one and only Library in 1929 is now the Irving K. Barber Learning Centre, one of several libraries on campus, and looking so much smaller in the drawing without the new wings to the left and right of the building, which were added in 2002 when the library was almost 80 years old! But the original facade is still the same as it was for the students studying at this library in 1929. Here too, is a sketch of the first home for the School of Nursing on campus: The Science building.

Images provided for research and reference use only. Permission to publish, copy, or otherwise use these images must be obtained from the University of British Columbia.