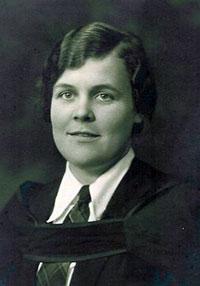 “Hurrah for a bowl of soup!” wrote Edith “Toddy” Tisdall, Class of 1929, in describing how in the Great Depression of the 1930s she, as the school nurse, and the local teachers of Kelowna had set up a hot-lunch program for school children. The program, which she described in the Public Health Nurses’ Bulletin, provided milk or vegetable soup and hot cocoa daily for 80 to 100 youngsters, of which about 70 were “free” cases. Those who could pay donated three cents for a lunch. “The personal thanks of some of the parents and the grateful looks on the youngsters’ faces has more than compensated for our efforts,” she recorded. (1)

Edith White Tisdall was born in 1905 in Vancouver. Her entrepreneurial father was a retail merchant; by the time she entered the UBC School of Nursing in 1923, he had served two terms as a Member of the Legislature in Victoria, and was a long-serving city councilor and a short-term mayor for Vancouver. At UBC, “Toddy” was active in campus activities, including the Players’ Club, before she entered the clinical portion of the Nursing program at Vancouver General Hospital. 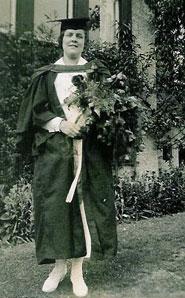 She graduated from both UBC and the Vancouver General Hospital in 1929. As one of the early UBC Nursing graduates she embraced the new field of Provincial Public Health Services, moving to Kelowna after graduation to become school nurse for the district. In another article for the Bulletin, she described the challenges. A major project when she first arrived in Kelowna was to arrange, with assistance of local dentists, to conduct a dental survey. The results showed that 94 per cent of the 850 students in the area needed dental care. Edith then began working with parents and local authorities to arrange the care, which almost immediately led to a marked improvement in general health of the children.(2)

Although she worked in nursing only until her marriage in 1932 to Harley Robert Hatfield, she maintained a life-long interest in public health nursing and maintained contact with classmates. Throughout her life she continued to subscribe to The Canadian Nurse. For most of her married life, the couple and their four children lived in Penticton, where her husband ran a major construction company, was involved in local politics, and had a life-long-interest in mapping the Cascade wilderness area. Edith died in 1984. (3)

1 Public Health Nurses’ Bulletin, 1 (9), March 1932, pp. 31-32.
2 Public Health Nurses’ Bulletin, 1 (7), May 1930, pp. 23-36.
3 An Edith Tisdall Hatfield fonds is available in the UBC School of Nursing Archives maintained by the BC History of Nursing Society. A Harley Robert Hatfield fonds, and his collection of 152 wilderness area maps, is available in UBC Rare Books and Special Collections.