The class of BSN’61 was the last class in the “old” curriculum of one year pre-nursing, first year nursing on campus in Sept 1956, two and a half years immersed in VGH program living in residence with a few weeks summer program at UBC School of Nursing, graduating from VGH with a diploma, then a fourth year at UBC with a major project to be submitted in Sept. with graduation in Nov.  – a total of five and a half years.  The Director was Evelyn Mallory who taught us nursing history, values and professionalism with great knowledge and wonderful humour. 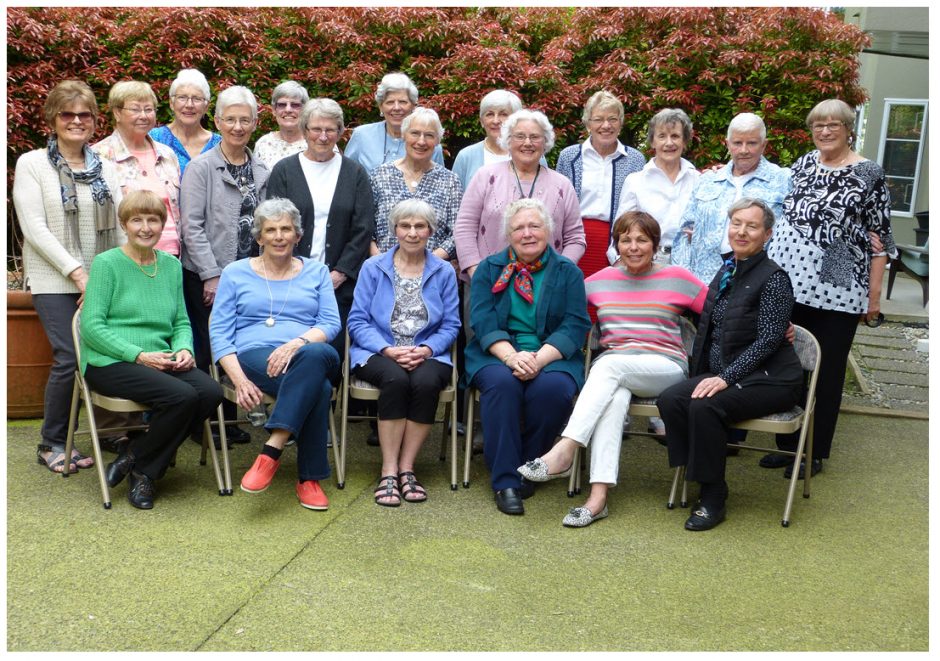 As a group, we found immediate comradeship, friendship, and deep concern for each other as we learned nursing based on the theoretical tenet of Florence Nightingale, “Nursing is doing for others what they cannot do for themselves” and so we learned both caring for and caring with those in our care. We shared many of those precious moments and endless stories as we became professional nurses with degrees – still quite rare in hospital care in 1961.  During these years, we learned to play bridge between classes, wrote several “class songs” for various events and took part in an annual football game to raise funds for the Blood Drive….Nursing against Home Economics gals with Engineering and Aggies being cheerleaders, coaches and first aid folks!!!  The event was successful and much fun.  However, Miss Mallory was always concerned as the number of splints, slings and casts increased after each practice!!!

Following graduation, our nursing careers and personal lives varied. We lived through, and contributed to, many changes in health care and the evolvement of nursing education, research and expanded roles.  We moved around the country and the world, but always kept in touch through an annual Newsletter.  Many became pioneers in the changes over the years with graduate education, and being the firsts in new roles such as Clinical Specialist and Nurse Practitioner.  Others became counsellors with Psychology degrees.

Over the many years of marriages, childbearing and child-raising, sadness, joys, becoming grandparents, illness and now aging, we have continued to be a very special group to each other.  We have had a newsletter for each of the 58 years since graduation. Until the 90’s, it was typed on a typewriter, copied, and mailed. Since then, news and an updated list of addresses have been sent by email. We get together each year for a luncheon at someone’s home, and every five years, we have held a three day reunion, including husbands, at various hotels around BC. We no longer plan these ‘big’ reunions, but continue to have luncheons every year, husbands included.  There is always much conversation and many laughs.

Nursing ’61 class is a group that we describe as “another family.”  We travel to attend the annual events and sadly, a few celebrations of life over the years.  We have set up a Memorial Fund at UBC to which we contribute as a group each year.  It is difficult to capture in words what we mean to each other…  but we support one another by phone and mail, and have lots of fun when we get together.   From our first year in 1957, we continue to experience a lifelong comradeship, a feeling of warmth and security in each other with deep and lasting friendships.