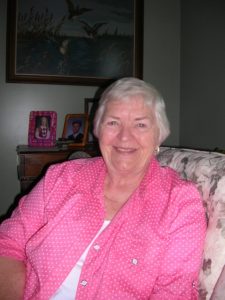 A graduate of the UBC School of Nursing in 1959, Chris Morrison was born in Vancouver and attended Kitsilano High School. She had considered studying home economics at UBC, but opted for nursing, joining the ranks of nurses in her family – her mother (RN, St. Paul’s Hospital), an aunt and two cousins.

After graduation she became a medical-surgical nurse at Peralta Hospital in Oakland, California, a position made possible only because the degree from UBC gave her the necessary requirements for registration with the California Nurses’ Association. She transferred later to Merritt Hospital to obstetrics, a field she preferred.

After marrying Jim Cissell in 1961 she became the nurse for a pediatrics group in Alameda, appreciating the steady hours that position provided. In 1963, and until her return to Canada, she turned to public health nursing for Alameda County. Between 1965 and 1970, except for a three months stint at Vancouver General Hospital (VGH), Chris was at home with her two young daughters.

In 1970 she returned to nursing, but encountered difficulties at Richmond General and at VGH in finding a position that would accept someone with a degree. Finally she found a position at VGH as a building shift supervisor, working part-time until her children were of school age. In the summer of 1974 she taught nurses’ aides and orderlies as a VGH instructor.

In the fall of 1974 she settled into the career position she considers her favorite one. She became a public health nurse for the Richmond Health Department holding this for 27 years until her retirement in 2001.