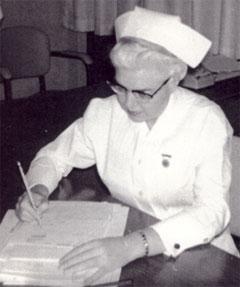 During her training years, she contracted tuberculosis and spent six months in Tranquille Sanatarium. Following graduation, she was offered a job with the Division of TB Control to run the new affiliation program – the first provincial compulsory TB affiliation in Canada for all student nurses. Her job as instructor lasted until she was appointed head nurse and then Assistant Director of Nursing. In 1948, she left the Division and moved into a number of interesting and innovative positions in various parts of B.C. and Canada, including a one-year stint as a travelling instructor for the Registered Nurses Association of B.C.; this was an early continuing education course designed to help nurses keep current on advances in nursing. From 1952-1954, she was Assistant Director of Nursing at the new Pearson Hospital in Vancouver, which had been opened to care for the influx of TB patients following World War II but which was now an hospital for long-term, chronic care conditions, including poliomyelitis.

After leaving Pearson, she once again moved through a variety of senior positions, including Director of Nursing Education at Royal Inland Hospital in Kamloops and Director of Nursing at Penticton Regional Hospital and later Lions Gate Hospital in North Vancouver. She had taken the one-year special course offered by the University of Toronto in Hospital Administration in 1964. Following her time at Lions Gate, she was appointed a surveyor and later associate executive director for the Canadian Council on Hospital Accreditation (CCHA). The Council set standards for and accredited hospitals all across Canada. She later wrote that “the Council was the greatest challenge of my career” but that she was given opportunities to use her organization, planning, and writing skills. Her next career move was as Director of Patient Services at Shaughnessy Hospital in Vancouver from 1978 to 1980 and her final career move was as Director of Special Projects at the Vancouver General Hospital from 1980-1983.

She retired in 1983 first to Penticton and later to Kelowna, and, despite health problems, continued to lead an active life working on her memoirs. She died peacefully in Kelowna on March 24, 2006, age 87 years.

Provided by the B.C. History of Nursing Society