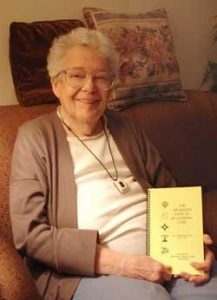 Kirstine Griffith (BASC(N) ’45) was born in Vancouver General Hospital in 1922 and from her early years, always knew she was going to become a nurse.

She entered into her first year of nursing (which was her second year at UBC) in 1940, and the following year began in the School of Nursing at Vancouver General Hospital (VGH). All students were required to live in residence and there were very strict rules regarding curfew, lights out and hours of classes. She recalls her anatomy instructor telling her and her classmates the three reasons why women entered into nursing: feelings of altruism; morbid curiosity; and to catch a husband, “as everyone knew doctors had excellent prospects”

In 1944, Kirstine completed her Graduation Exercises, and received the Agnew Gold Medal in Obstetric Nursing. She spent that summer working at the provincial Venereal Disease Clinic. Upon returning to UBC in September, Kirstine was elected president of the Nursing Undergraduate Society (NUS) and also became a member of the engineering undergraduate executive. She graduated on May 10th 1945 and was married on May 26th to Don Buckland.

She began work as a Public Health Nurse in the Saanich Health Department near Victoria and stayed there for two years before resigning in 1947. She gave birth to her first daughter, Elizabeth, in January of 1948 and her second, Dorothy Ann in July 1950. Their son, David Francis was born in March of 1954. In 1951, her husband lost his sight, and she devoted herself to being his personal assistant. Following his death, in 1956, Kirstine returned to nursing.

Kirstine remained active in community service, crocheting and quilting several hundred lap robes that she donated to the local health authority. In addition, Kirstine’s resource book, “The Religious Aspects of Nursing Care,” originally produced in 1996, has had more than four printings. The book attunes nurses to practices they may have never encountered, so that they can provide culturally safe care. “It’s not enough to identify a patient’s religion,” said Kirstine. “Nurses need to ask questions about practices and listen.” She is aware that matters pertaining to religion raise sensitive issues within health care. “My intention was to ease the role of nurses in caring for patients when they may not know of the religious practices their patients follow,” she says. There are times when it is extremely helpful to understand how fasting periods could influence medication administration or how modesty preferences affect preparation for surgery.

Kirstine donated profits from book sales to various nursing scholarships, including a nursing scholarship fund at the UBC School of Nursing. “We really value the support of alumni like Kirstine,” says Dr. Sally Thorne, Director of School of Nursing (2002-2010). “These alumni find areas of need and fill them with thoughtful solutions. Not only has Kirstine created an excellent resource for practicing nurses, she also found a creative way in which to help the future generation of nurses through her financial generosity.” In 2009, The Religious Aspects of Nursing Care was converted to an ebook format which is now available on-line for free here

In 2013, Kirstine moved to Blenheim Lodge. She passed away December 5, 2014 after a brief illness. She will be fondly remembered as a great friend to the UBC School of Nursing.

The Religious Aspects of Nursing Care