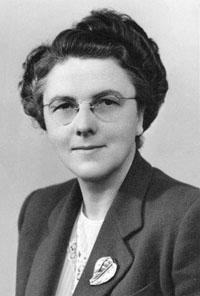 Lyle is one of the most well-known Canadian nurses in the world, and it is a true privilege to celebrate her as one of our own. And indeed, she in return believed that the UBC School of Nursing was an important contributor to her career and was proud to consider herself an alumna.

After graduating from UBC, Creelman’s first position was as a public health nurse in Cranbrook, British Columbia and then Director of Nursing at the Metropolitan Health Committee (later the Vancouver Health Department) and became President of the Registered Nurses Association of British Columbia (now CRNBC) in 1944.

In 1948, Lyle began collaboration with J.H. Ballie on a major study of Canadian public health services. This study led to the publication of the Baillie-Creelman Report in 1950 which was considered for many years to be the main reference for the preparation of public health professionals in Canada.

Her international nursing role began in 1944 when she joined the United Nations Relief and Rehabilitation Administration and evolved as she became a nursing consultant for the World Health Organization (WHO) in 1949, and later Chief Nursing Officer in 1954. She spent 14 years in this position, developing and innovating nursing standards and practice that would ensure many countries’ ability to achieve and maintain self-sufficiency in health care. According to the news journal of the International Council of Nurses in Geneva, “In these years she [had] probably achieved more for nursing throughout the world than any other nurse of her time.”

Although she retired from WHO in 1968, she continued to pursue nursing excellence and was commissioned to study maternal and child health services in Southeast Asia as well as continuing to be a mentor and role model to colleagues.

Lyle has been greatly celebrated for her outstanding accomplishments in nursing. Among the recognitions she has received are the Medal of Service of the Order of Canada in 1971, the Canadian Centennial Medal in 1967, the Jeanne Mance Award (which is the highest honour of the Canadian Nurses Association), an honorary Doctorate of Laws from the University of New Brunswick in 1963, and in 1992, UBC awarded her an honorary Doctorate of Science, the first graduate of the School of Nursing to receive such an honour.

Lyle passed away in early 2007 in West Vancouver at the age of 98. The Lyle Creelman Research Endowment Fund has been established through a major gift from her estate which will be used to fund research by the School of Nursing in the area of public health and the prevention of disease.

She also gifted the School with a number of historic artifacts gathered during her international activities and some of her most prized awards. These artifacts will serve as meaningful reminders of the global commitment toward which UBC Nursing aspires, and we look forward to being able to create a permanent display within the University.