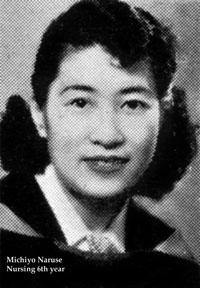 Michiyo Uyede was among 76 students who received honorary degrees at a special ceremony held during UBC’s spring congregation to recognize and honour Japanese Canadian students whose university experience was disrupted in 1942. During this dark period during the Second World War, all persons of Japanese descent were uprooted and exiled from the B.C. coast, a violation of their basic citizenship rights. On this 70th anniversary, the University wanted to recognize the injustice they endured and to honor them and their families, welcome them as alumni, and celebrate their contributions as citizens of Canada.

In the May 30, 2012 ceremony, Michiyo (Uyede) Naruse was “reconferred” with the degree of Bachelor of Applied Science (Nursing) she received in the spring of 1942. She has since died, but her story was collected by the Japanese Canadian community and the University who used every available strategy to try to locate the students or their families.

Michiyo Uyede (sometimes spelled Uyeda), also called Alice and “Mikkie” by her nursing classmates, was born in Vancouver May 19, 1917. She enrolled in UBC’s six-year Nursing program in about 1939, and completed the three-year clinical portion of the program at Vancouver General Hospital in 1941. She had been active in the Nursing Undergraduate Society, serving as class representative while at VGH. She returned to UBC for the sixth and final year of theory and after intervention by the School was allowed to remain in Vancouver after the evacuation to complete her nursing studies.

According to Return: A commemorative yearbook in honour of the Japanese students of 1942, which was published for the ceremonies, she was one of the few who received permission to attend the 1942 graduation exercises. An article in the New Canadian newspaper of May 14, 1942 indicates that she was awarded a graduating prize – the “Provincial Board of Health Award for Public Health.” After the war, she moved to Montreal and worked as a surgical teaching supervisor at Children’s Memorial Hospital. In 1950, she married Henry Kanao Naruse and they moved to Trail, BC. While raising her family, she was involved in many community activities. In the 1970s, she took a nursing “refresher course” from BCIT so she could return to nursing at the Trail Regional Hospital. In 1981, she received her Master’s in Health Care Planning degree from UBC. She then made a career change and became a fashion designer and entrepreneur. She died in Trail on March 1, 1998.