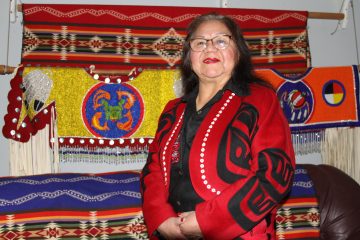 Born into the T’it’q’et First Nation, formerly known as the Lillooet Indian Band, which is a member of the P’egp’ig7lha Clan within the larger St’at’imc Nation, Lucy grew up in a family of 13 children in Lillooet, BC, learning a work ethic that became evident throughout her entire career. Although both of her parents and most of her older siblings were forced to attend residential schools, as one of the youngest siblings, Lucy had the opportunity to attend public school instead. After high school, she moved to Vancouver to attend secretarial school and found employment as a hospital unit clerk at BC Cancer and Richmond Hospital. While she was working on the maternity ward at Richmond Hospital, one of the nurses noticed that Lucy had a real passion and drive, and encouraged her to consider becoming a nurse. That was a new idea for Lucy, as she had never met any Indigenous nurses and had not really thought it was an option for her. But at age 35, juggling a job, a young son at home, and coordinating childcare with a partner who also worked shifts, Lucy went to night school to upgrade her high school science credits and was accepted into the nursing program at Langara College. She loved that program and graduated in 1997 with her Registered Nurse diploma. She then continued on to the University of Victoria, where she earned her BSN degree in 1998.

Lucy’s first nursing position was at the Canadian Diabetes Association as Indigenous Lead. There she created health promotion messaging incorporating the Mind, Body and Spirit aspects of self, family and community. She asked to do a practicum at the Canadian Diabetes Association because so many of her family members were living with diabetes. She then was hired at the BC Centre for Disease Control (BCCDC) as program manager of Chee Mamuk, an Aboriginal HIV/AIDs Program. In that role, she developed an educational program that weaved together cultural aspects of sharing health information through cultural sharing of storytelling and traditional teachings. The program included making meaningful items that enhanced both teachings of physical diseases such as HIV/AIDs and learning how to make drums, carve cedar, make buckskin moccasins to name a few. This became a foundational curriculum that continues to influence local service delivery. 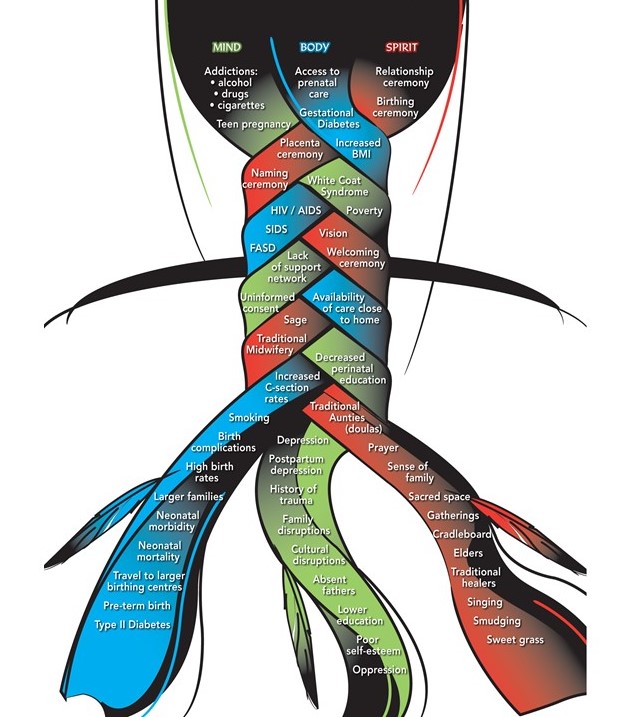 During her time at BCCDC, Lucy was motivated to continue her education and enrolled in the master of nursing program at the UBC School of Nursing. During her program, she was inspired to develop some of her early ideas on Indigenous nursing knowledge which included her “Braid Theory.” She continued to develop this metaphor for cultural wellness over time, and it has been a powerful influence on many key policy documents under her leadership over the years. For example, it is showcased in A Guide to Wise Practices for HIV/AIDS Education and Prevention Programs (2009), published by BCCDC. It was also was prominent in informing a key 2021 document Celebrating the Circle of Life, Coming back to Balance and Harmony:  A guide to emotional health in pregnancy and early motherhood for Aboriginal women and their families, published by BC Reproductive Mental Health Program and Perinatal Services BC. As a culminating project to her graduate studies, Lucy completed a master’s thesis in 2005 entitled First Nation Perspectives on why First Nation Youth are at Risk for Hepatitis C, under the supervision of professors Joy Johnson, Gail Butt, and Marg Osborne. It was a community-based project that used ethnographic methods to explore, from the perspective of First Nations youth and elders, how culturally relevant education could help with Hepatitis C prevention.

After ten years with BCCDC, in 2008 Lucy was recruited to what is now known as Perinatal Services BC, within the Provincial Health Services Authority, as the Provincial Indigenous Lead – a position she would hold until her retirement in 2022. In that position, she has worked collaboratively with physicians, midwives, nurses, administrators and other allied health workers across a wide range of strategic projects. Her leadership style has been described as inclusive, seeing each person as equals around a circle, bringing unique expertise and experiences.

Throughout all of her career, Lucy has been widely recognized as a leader of ideas, bringing a wonderful perspective of thoughtfulness and creativity to her work. A clear illustration of this creativity and sensitivity is evident in a 2021 publication entitled Honouring Indigenous Women’s and Families’ Pregnancy Journeys: A Practice Resource to Support Improved Perinatal Care created by Aunties, Mothers, Grandmothers, Sisters, and Daughters, published by Perinatal Services BC under her leadership and involving a large collaborative team of experts from health authorities around the province. This document is a stellar example of Lucy’s vision for improving Indigenous knowledge systems and ensuring that both cultural safety and a trauma-informed approach to care are available to support the perinatal period for Indigenous women and families.

Beyond her formal employment roles, Lucy has also been a highly engaged member of numerous professional service and voluntary groups. For example, she is a longtime member and Past President of Native and Inuit Nurses Association of BC, a role that led her to become an ambassador for Indigenous nurses across the country. She has generously shared her deep wisdom across Canada’s policy and research communities, always seeking to make a difference by addressing policy-level improvements for the betterment of Indigenous Peoples. For example, she has been active in the Canadian Association of Perinatal and Women’s Health Nurses (CAPWHN), serving on their Advocacy and Policy Committee that developed that organization’s Position Statement on Cultural Safety and Humility. She also ensured that organization was among the first Canadian non-Indigenous nursing specialty groups to adopt a position statement in response to the Truth and Reconciliation Commission of Canada’s Calls to Action. Lucy has also given generously of her time to nursing schools, serving as a guest lecturer and keynote speaker around the province, and bringing her consistent message to their early learning.

Lucy was seconded to the First Nation Health Authority from 2016-2021 for 40% of her time and has contributed a storytelling approach to many reports that share individual stories and the teachings of transitioning from childhood to adulthood (coming of age) to help the readers learn how Indigenous Peoples are resilient. One such report is Sacred and Strong: Report on the health of First Nations Women and Girls Tells Stories of Strength and Resilience.

Various aspects of Lucy’s career have been documented for posterity in BC health authority records. Some recent examples include:

Lucy Barney’s career contributions have been widely recognized in British Columbia and Canada, including such tributes as an ACCOLAIDS Award for Innovative Programming and a Langara College Outstanding Alumni Award for Community Service. In 2019 she was awarded a Centenary Medal from the UBC School of Nursing  and on December 9th, 2021, was honoured by the provincial nursing professional association Nurses & Nurse Practitioners of BC with its prestigious Lifetime Achievement Award NNPC 2021. 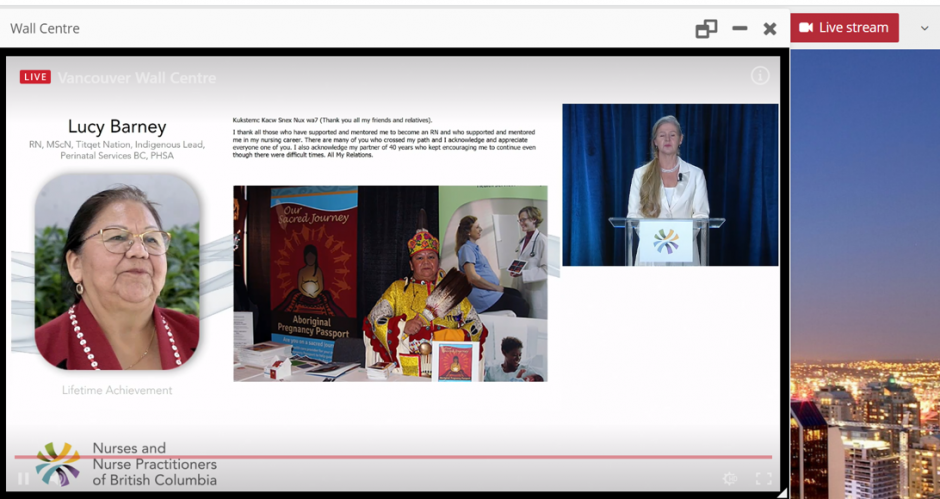