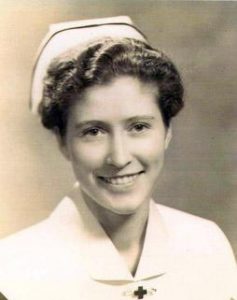 When I was a student in the UBC School of Nursing in the 30s, it was a seven-year program. The first three was the same as for Arts and Science, and the next three spent at Vancouver General Hospital (VGH). At the end of this time, RN exams were written. The seventh and final year of the program was back at UBC, and we were given two options: Public Health Nursing, or the Teaching and Supervision Course. I chose Public Health, and although given the chance I would reconsider that choice, it did provide some memorable experiences.

One experience was a visit to a Mennonite family to see why a boy was not in school. We found them living in the barn, which housed the family at one end, and the cows (like an audience) on the lower level. The cows provided warmth for the family like a central heating system! The boy said “he was sick” and thus could not attend school. However, it was obvious that he had been kept at home to work (which happened a lot in those days).

After gradation, I went to Chicago De Lee’s Lying-In Hospital for a Post Graduate Course in Obstetrics. For clinical practice you were sent with a team from the Maternity Centre until you were capable of performing on your own. We served the Black and Mexican residents of the slums who worked the slaughterhouses. The neighbourhoods were so poor that many of the tenements had no electricity and were full of vermin, cockroaches and even bed bugs though fumigated regularly. There were no phones, and thus, when the maternity team was needed a family member would flag down a police car to radio for the team. Teams consisted of a nurse from the Centre and a medical student. The nurse was responsible for both the care of the patient and the teaching of the student! 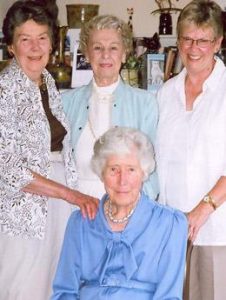 Every time I hear the song “In the Ghetto”, it reminds me of the many children I saw born there and the hard life they had to live.

I returned from Chicago in 1942 to sign up for the Army just as the Japanese attacked Pearl Harbour and shelled a lighthouse on the West Coast Trail of Vancouver Island. Victoria was blacked out each night until the fear of immediate danger had passed. There was a great shortage of RN’s to staff the civilian hospitals as so many had gone overseas for the Services. Delivery was done by the doctors while the RN gave a mild anaesthesia consisting of a few drops of chloroform on a mask!

In June 1944, I started in the army and transferred to Penticton for induction into the role of Nursing Sister. Impressed on us was that we were to consider ourselves officers first in all situations, and nurses second; however I always felt that the nurse in me outweighed the importance of being an officer. In November, I was posted in Prince George, which was then a very small town. The little civilian hospital that served the town was on old house with three floors. On my days off, there was little to do, so I volunteered in the hospital and my help was greatly appreciated.

At the end of March I was posted to Vancouver in the newly built Vancouver Military Hospital. Another nurse (“Babe” McFadden) and I were the first to arrive and were tasked with opening it up to receive soldiers returning from overseas. The war ended shortly thereafter. Nurses who had been overseas could choose to leave or stay in the army, and those who had been in over a year but not gone overseas were demobilized immediately. I was one of these, having only been in 14 months.

I applied and was accepted to the new Post Graduate Course in Operating Room Nursing at VGH and within two weeks of leaving the army, began the course. Upon completion, I took a staff position in the VGH OR from January to September ’46, at which time I left to take the one-year Teaching & Supervision course at UBC. Due to my army service, tuition was paid for by the Federal Government. I received my diploma in May ’47. Shortly after, I was made Clinical Instructor in the OR for the VGH and UBC nursing students. I continued in this position for 11 years. There were many memorable experiences as surgery developed and changed rapidly, there wasn’t a dull day!

In 1961, I took educational leave for one year to get my master’s degree in Nursing Education at the University of Washington. It was a very strenuous year! The program matched theory with practice without responsibility for routine duties in the hospital. I was impressed!

In March of 1963, I returned to Royal Jubilee Hospital and obtained a position in the OR (once again). I was to occupy the new position of Inservice Educator for the OR staff nurses and aides. The OR was incredibly old and needed updating in every way (much as it did when I had been there during my army service!). There was a miniscule Recovery Room with two beds and one nurse; space was at a premium and there were not nearly enough instruments to make up sets in advance of their use. I spent the next two years doing general duty and orientation of new staff in the OR and helping as a ‘circulating nurse’.

In March of 1965, I was made Inservice Education Supervisor for all RN staff. I had no budget or any visual aids and had to use my own slide projector at first. I spent the last ten years of my career at this job and during that period the following specialized services were introduced: coronary care and telemetry; open heart surgery with its own ICU; adult general ICU; haemodialysis and peritoneal dialysis; TPN and use of respirators (before we had respiratory technicians).

I resigned in August of 1975, at 58 years of age, in order to take care of my mother who had many physical problems as well as arteriosclerotic dementia. My father had died in 1971 and I had been living with her since then. I cared for her for six months before she had to be hospitalized and wait ten months for a long-term care bed where she lived another 17 months before she died. I visited everyday and gave her the care that she would not have otherwise received in such a facility.