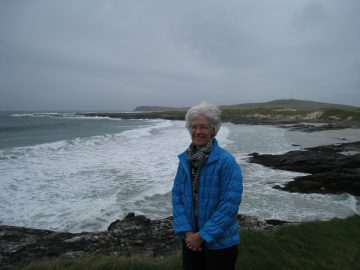 In 1965, Anne graduated with a BSN (Honors).  Her first nursing position was as a staff nurse on a high acuity general surgical unit at Vancouver General Hospital.  After gaining valuable clinical nursing expertise, she moved to Toronto in the fall of 1966 to teach at the Atkinson School of Nursing, Toronto Western Hospital.  The School’s programme, the first of its kind in Canada, was designed with a two year educational component followed by a one-year internship.  Teaching on a medical unit was challenging. Anne was assigned to teach neurological and neurosurgical nursing in the classroom despite having no specific experience in this specialty.  It perhaps presaged an aspect of her future nursing career.  A key memory from this time is participating in the care of the first heart transplant patient in Toronto.  In 1968, Anne was offered a lecturer position at the University of Toronto.  She expanded her classroom and clinical teaching experience working with students on medical and surgical units at the Wellesley and Sunnybrook Hospitals.

Deciding to seek further education in 1970, and supported by a Canadian Nurses Foundation Fellowship, Anne enrolled in the Master of Nursing programme at the University of Washington.  She continued to build on her understanding of both the care of adults and teaching.  One of her well-remembered teachers was Jeanne Quint Benoliel, a pathfinder for nursing in end-of-life situations.  Ever committed to improving clinical nursing care, her thesis research was focused on the effect of frequency of deep breathing, coughing and turning interventions on the respiratory function of abdominal surgery patients.  As a balance to studying, Anne took up day hiking with a classmate and enjoyed many of the trails in the Seattle area.

After completing her graduate work in December 1971, Anne returned to the University of Toronto as an assistant professor and taught in the second and third years of the programme.  One morning, on a crowded subway train, she asked herself what she was doing in Toronto when she could be enjoying life on the West Coast.  About this time, Dr. Muriel Uprichard, at that time Director of the UBC School of Nursing, began to persuade Anne to join faculty in developing the new two plus two programme.  Anne returned to Vancouver in 1973.  Her initial experiences as an assistant professor included learning the complexities of the UBC Model for Nursing.

Throughout her career, teaching in clinical settings was a special interest; she believed that teachers must be knowledgeable clinicians.  After being assigned to teach students on the neuroscience units at Vancouver General Hospital she gave in to fate and became an expert in this specialty.  As an active member of the Canadian Association of Neuroscience Nurses, she was a leader in seeking certification for neuroscience nurses and in the development of the Canadian Nurses Association’s first certification examination.  She attained her own Certification in Neuroscience Nursing in 1991 and recertified in 1996.  Anne also taught students on the vascular and leukemia/bone marrow units at Vancouver General Hospital.  One significant area of interest that emerged from these experiences was patient and family education.  She designed a Warfarin Patient Education Programme supported by the Canadian Heart and Stroke Foundation and her research included the evaluation of this programme.

In 1985, her belief in maintaining clinical expertise and her interest in patient education, led her to accept the first joint appointment in nursing between the School and Vancouver General Hospital.  In this position, she chaired the Patient Education Committee.  The work of this committee provided a basis for the ongoing expansion of patient and family education initiatives at the hospital.

In the early 1990s, at a time when care of those with HIV-related illness was a major challenge, Anne was asked to collaborate with Irene Goldstone, Director Professional Education and Care Evaluation at the B.C. Centre for Excellence in HIV/AIDS, to offer an undergraduate elective in HIV/AIDS care.  This highly regarded course, designed and taught in partnership with health professionals, members of service and advocacy organizations and those living with HIV and AIDS, was the first of its kind in Canada.  The rigorous evaluation of the course substantiated its success.  Anne and Irene were approached by Dr. Andrew Chalmers, at that time Associate Dean, Faculty of Medicine, and asked to be members of a core team including faculty from medicine, pharmacy and social work to design, teach and evaluate the first interprofessional elective course in HIV/AIDS prevention and care at UBC.  Anne participated actively in all aspects of this course and provided leadership in the further development of interprofessional education at UBC and in Canada.

Throughout her career Anne’s scholarly activities arose out of her clinical and teaching experiences most notably related to patient education, neuroscience nursing, and HIV/AIDS education for health professionals.  For example, the evaluation research related to HIV/AIDS education provided guidance regarding educational approaches and the impact of partnerships with health professionals and members of community groups on student learning outcomes.  Work in neuroscience nursing centred on sharing knowledge, approaches, and experiences that would impact the quality of care.  An interdisciplinary research project focused on a unique group of neurosurgical patients and their families, those with skull base neoplasms.

Recognition of Anne’s work came most importantly from the many undergraduate and graduate students she taught and from colleagues in nursing and other health care professions she worked with, particularly in clinical settings.  She is an Honorary Member of the Canadian Association of Neuroscience Nurses.  Awards include the Nursing Undergraduate Society Award for Teaching in 1978-1979, the Award of Excellence in Nursing Education from the RNABC, the Codman Award of Excellence for Neuroscience Nursing and The Brain Tumour Foundation of Canada Award of Recognition.

Anne retired as an associate professor emeritus in late 2002.  In retirement, among other activities, Anne has pursued an interest in Vancouver’s history combined with writing the story of her family’s iconic Vancouver business, James Inglis Reid Limited, which was established in 1908 and located for most of its time on Granville Street between Dunsmuir and Pender Streets.  It was well known particularly for its cured and smoked bacons and hams, sausages and haggis. Anne’s book The Larder of the Wise: The Story of Vancouver’s James Inglis Reid Ltd. was published in September 2020. An excellent review of this book by Vancouver is Awesome can be found at https://www.vancouverisawesome.com/food-and-drink/james-inglis-reid-butcher-larder-wise-vancouver-history-book-2732900. Anne participates actively as a member of the Friends of the Vancouver City Archives and maintains a connection with the Museum of Vancouver.  As a member of the Readers Panel of British Columbia History Magazine, she continues to learn about many facets of the province’s history.