Faris (nee Fisher) was born in 1895 in Dalhousie, New Brunswick. Throughout her life she allowed destiny and her unwavering curiosity to carry her to seminal points in history as one century rolled into another. From her first adventures as a child moving across a continent until her death some 90 years later, this extraordinary pioneer accepted and even relished a life of change and action. In the summary of her early life, below, you will read that Marion was among the students at the Vancouver branch of McGill University in 1915 as it transitioned into the University of British Columbia. In accepting a personal invitation from Ethel Johns to take part in a new vision of nursing education in 1919, Marion Fisher found herself among the first nursing convocation in 1923. In alphabetical order, she was also the first among the three graduates that year (with Margaret Healy and Beatrice Johnson) and so we surmise she would have been the very first graduate in the whole of the Commonwealth to receive a bachelor of applied science in nursing degree from a university. 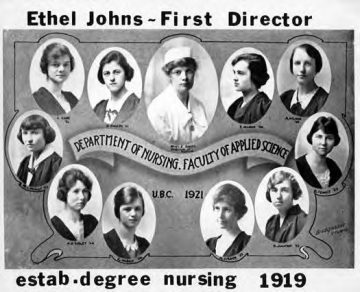 n’s career as a paid nurse was a short one, but she found plenty of opportunities to apply her nursing knowledge throughout her life. After graduation, recovering from tuberculosis, and a brief stint as a public health nurse in Kamloops, Marion met the man she would marry in May 1925. They “became engaged in June, were married in August, and set sail for China in September.” As a young bride, Marion was suddenly swept into life as a missionary in Asia throughout the turbulent years when China and India were demanding new roles on the global stage. Her story, entwined as it was with that of her adventurous husband, has been meticulously recorded by Marion herself and edited by family members in Memoirs of Donald K Faris and Marion Faris, a manuscript meant for family members to enjoy. In those pages are vignettes and anecdotes that include the loss of a beau in WWI, the arduous task of learning Chinese, a long stay with Dr Robert McClure (a Canadian doctor who worked for forty years in China and India), the death of Sun Yat-sen and rise of Chiang Kai-shek, the newlywed missionaries’ flight to Korea, and a brush with a refugee from the Russian Revolution, and so far she has only been married for five years! Two more published volumes that reference Marion’s life include To Plow With Hope by Donald K. Faris (http://resolve.library.ubc.ca/cgi-bin/catsearch?bid=1918076) and excerpts from Canada’s Global Villagers: CUSO in Development, 1961-86 by Ruth Compton Brouwer (http://www.ubcpress.ca/canadas-global-villagers | http://resolve.library.ubc.ca/cgi-bin/catsearch?bid=7045168).

The latter book details how, in their sixties, Don was employed in India with UNICEF and Marion continued to find use for the skills she had acquired in the School of Nursing’s program. Young Canadians volunteering in India, unfamiliar with living safely in unsanitary conditions, could become very sick and find themselves under Marion’s care. Brouwer writes, “The Farises arranged for the hospitalization of some volunteers who became dangerously ill. More usually, as well as providing nourishing meals, Marion Faris, a public health nurse by training, dosed her patients/volunteers with vitamins and other remedies of her own devising to restore them to health, sometimes accommodating them for six weeks or more.” 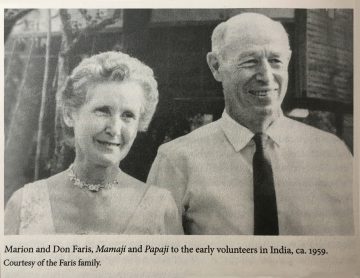 Please enjoy the following summary of Marion’s early years in her own words:

“I was born a child of the manse in Dalhousie, New Brunswick, where my father was the Presbyterian minister. The climate in northern New Brunswick was harsh in winter, yet whatever the season, father had to make his rounds in an open horse-drawn buggy. As a child, I was fascinated by the mass of tiny icicles clinging to his beard when he returned from a long winter’s drive in the country. With six children, ranging from three to fifteen years, the thought of uprooting that home and crossing the continent must have been overwhelming.

“Shortly after he had left home to explore possibilities, I brought home a case of measles. No sooner was I better, then all the others, including the maid, took to their beds, and mother was left alone with a house full of ill people on her hands. The house was large, with few modern conveniences. I was only seven at the time and naturally of little help. Douglas, the oldest, was not at home. I would never forget the night Edith began climbing the head of her bed in delirium. Mother must have been at her wit’s end when she wrapped me in her fur coat, so long on me it almost brushed the floor, and sent me off into the night to seek a neighbour’s help.

“By the time the sick ones were all on their feet again, there was still no reprieve. The business of caring for a large family, disposing of furniture, packing, closing house, followed by six days on the train with six lively ones in tow took its toll. The one thing that must have saved Mother’s sanity was her sister, Susan, who travelled with us to California. We spent two years in Cayucos, a coastal village, and the following five years in Tomales, forty-five miles north of San Francisco, where we experienced the great San Francisco earthquake of 1906.

“Canada never left my father’s blood, and in 1909, we relocated in Vancouver, where at the age of fourteen, I was enrolled in Vancouver’s Britannia High School. In 1913 I took my first year of university at the Vancouver branch of McGill University, the University of British Columbia not yet having been established. With the outbreak of World War I, instead of returning to university, I spent the next year at Normal School, followed by three years on the teaching staff of the Vancouver School Board. However, it soon became clear that this profession did not fit well with my temperament, and so I began casting about for another alternative. In those years there were few occupations available to women. I finally settled on nursing.

“I entered the Vancouver General Hospital’s Training School for nurses in September 1919. Shortly thereafter, Ethel Johns invited me to participate in her vision of a university nursing training program. It was a very significant challenge and called on all my strength and resources. However, it was history in the making and in 1923 I became one of the three graduates in the first degree program in nursing in the entire British Empire.

“Following this effort and accomplishment, I fell ill with TB, and was admitted to the Sanitarium at Tranquille. After my recovery, I applied for a position as a Public Health Nurse in Kamloops. Six months after that placement, I met my future husband, Don Faris, and from that time on, my life was inextricably bound up with his.”