Donelda was born in 1936, in Meaford, Ontario. Her mother was a nurse who was fond of her profession and worked part-time during many of the years Donelda was growing up. She decided that she wanted to be either a Home Ec. Teacher or a Nurse. Nursing won. She chose a then innovative, “two years plus one” nurse intern program at the Atkinson School of Nursing, Toronto Western Hospital. This program was composed of two years of mostly classroom learning and related clinical, followed by one year of clinical nursing, including one month at a Red Cross Outpost. On Graduation, she chose to enroll in the two-year degree program at the University of Western Ontario (now just ‘Western’). There she focused on ‘Nursing Education’.

Donelda Ellis with a group of third-year nursing students during their clinical rotation ayt Grace Hospital (the former name for BC Women’s) in 1985 (photo source, Legacy)

On completion of the degree program, Donelda was married and moved to Edmonton where her husband commenced graduate studies in Geophysics. Donelda was employed as the Nursing Supervisor-Instructor in the Maternity Department at University Hospital. That position included teaching in the University of Alberta Hospital School of Nursing as well as being the nursing supervisor on the hospital maternity ward. She concluded that appointment after two years when baby Mark was about to be born.

After four years in Edmonton, the little family moved to Vancouver where her husband commenced work as a professor in the Department of Geophysics and Astronomy. Baby girl Nicole was born soon thereafter and Donelda was fully occupied being a Mom – including during her husband’s sabbatical year in Edmonton (1971-72). While there, she took a nursing refresher course at U of A Hospital. On return to Vancouver, she studied public health nursing at UBC (1972-73) and subsequently worked in Vancouver as a public health nurse. That too was concluded after only one year when the family traveled to Nigeria for two years where her husband was seconded by the Canadian International Development Association (CIDA) to set up a master’s program in Geophysics in Zaria.

Needless to say, that was a challenging two years – travel, homemaking, school for the children, and health maintenance. Donelda took the position of Acting Principal of the School of Nursing at Wusasa Hospital, a Church of England-established school.  That position involved both administration and classroom teaching. 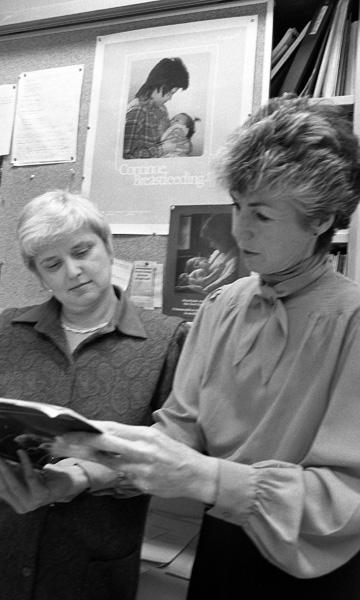 In 1976, the family settled back in Vancouver, and Donelda commenced study in the MSN program at UBC. On completion, she became a member of the UBC School of Nursing Faculty (1978) and there taught maternal and infant nursing (classroom and clinical), international nursing, and communication; she also conducted research, particularly related to breastfeeding. Following the tragic death of her close colleague and collaborator Sheena Davidson in 1980, Donelda went on to form a sustained and highly productive research collaboration with Roberta Hewat. Among the publications arising from their collaborative efforts, these are a few examples:

To employ some of her international experience, she was one of a small team from the UBC School of Nursing to make two overseas visits to Punjab, India, to teach the faculty in a school of nursing there (Guru Nanak College of Nursing). Also in her International experience was a year on sabbatical in Canberra, Australia where her husband was working, in which she wrote up research and taught in the School of Nursing in the Australia Advanced Education College.

Over the years, Donelda had also studied and completed the examinations to become an International Board Certified Lactation Consultant (IBCLC), and practiced that one morning a week for a number of years in a Breastfeeding Clinic. In addition, she continued this IBCLC practice for two years after her retirement from the School of Nursing faculty in 1999. After retirement, she was also the instigator and chair of a pilot study to initiate a Parish Nurse program in her church (Christ Church Cathedral in Vancouver) – which, in the end, was declined due to the cost.