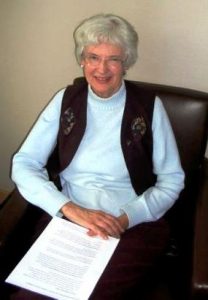 Diana Bishop, a graduate of the University of British Columbia School of Nursing in 1959, was born in Vancouver in 1936, first attended Point Grey Junior High and then graduated from Magee High School in 1954. At school Diana was involved in several clubs, such the MacMillan Club which allowed her to indulge in her love of music by ushering at the symphony and concerts, also the Library and the Red Cross. It was in these high school years that Diana started her interest in bird-watching, often lead by Dr. Ian McTaggart-Cowan, and in sewing both of which continue throughout her life. In the spring of 1954 Diana had a memorable trip with her parents to England visiting her father’s family and his youthful haunts, returning with stories of artists and writers some of whom were part of the Bloomsbury Group.

Immediately after graduating from UBC, Diana worked at Prince Rupert General Hospital in the operating room. In 1960 she returned to Vancouver to the pediatrics ward at St. Paul’s Hospital. This appointment included working as a pediatric instructor for St. Paul’s Hospital School of Nursing.

While working at St. Paul’s in 1960, Diana married Bruce Kennedy a teacher. Bruce’s teaching positions took them to Dawson Creek in the mid ‘60s, then to Whitehorse, returning to Victoria in the early 1970s. Two children, Karen and Warren joined the family in 1967 and 1971 respectively. Diana was a stay-at-home mum, rearing her children, helping out at their schools and involved in her church, St Andrew’s Cathedral. She returned to part-time nursing at St. Joseph’s hospital in gerontology in 1984 until it closed. Diana continued nursing at Royal Jubilee Hospital on the medical rehab unit and the Bay Pavilion, until her retirement from this part-time position in 2001. While working, Diana was diagnosed with bladder cancer that was successfully treated in 1994. A recurrence in 2005 was treated again with success.

Her lifelong activities include a love of sewing, creating fashionable and versatile clothing. She has also enjoyed concerts, the opera, ballet, singing in the church choir, golf andtravelling – to Paris, Italy and London. Later Diana enjoyed taking her granddaughter Kirah to the ballet and to concerts. She was delighted with Kirah’s enrollment at UBC in 2007, with having a granddaughter who would also be a UBC graduate.

From 2011 Diana was a resident at Gorge Road Maplewood Unit in Victoria, where she helped her room-mates and other patients on her floor, until she passed away on January 1, 2016, just eleven days after her 79th birthday.