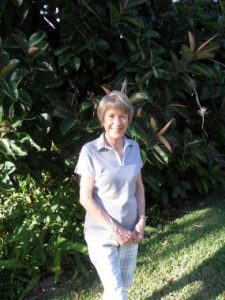 Rosemary Hambrook was born in Vancouver in 1936. She attended Magee High School then enrolling at the University of British Columbia School of Nursing in the class of 1959. After graduation she worked at Vancouver General Hospital in for three months and then moved to Toronto and shared an apartment with a classmate, Janet Carpenter. There she worked for two years for the Victorian Order of Nurses.

In 1961 Rosemary married Jim Lindores from Hamilton, who had an MBA and worked in management at Honeywell and at Eaton’s. Thereafter and before her daughter was born, Rosemary worked for two and a half years for Children’s Aid in Toronto supervising foster homes and foster children, aged up to three years of age. Andrea was born in 1961 and Kevin in 1965. In 1968 the family moved to London, Ontario and Jim joined Canada Trust as a Vice-President of Human Resources. Rosemary was a homemaker and became involved in extensive volunteering. This included doing eye tests in schools, organizing volunteers for canvassing for Heart and Stroke, fundraising for the orchestra and serving on the boards of Orchestra London and Family Services London. Influenced by her positive experiences at Children’s Aid, in 1971 Rosemary enrolled in a credit course at University of Western Ontario, thinking that she might pursue a degree in social work. She decided against this career, however, as it conflicted with her ongoing family responsibilities and the strong possibility that field placements would be out of town.

She was keen to re-enter the workforce after her children were in university. After much research she and Jim decided to invest in a new business, Sylvan Learning Centres that catered to the needs of students who needed more help than the school system was able to provide. Rosemary’s training for this work included an initial course at Sylvan Corporation headquarters and follow-ups yearly at Sylvan conferences in various locations. The training was in the teaching system and in test administration. While Rosemary was the administrator and did most of the testing and meeting with parents, there was a full staff of certified, Sylvan trained teachers. It was well received by the community and consequently Jim left Canada Trust to join her in the work. Eventually they had five separate Sylvan locations. It proved to be a very satisfying career.

Jim and Rosemary retired in 1996 to a life of travelling, playing golf, and spending winters in Sarasota, Florida. Rosemary also frequently returned to British Columbia to visit family and, as well as a group of five nursing friends – Dede Giegerich, Janet Carpenter, Norma Guttormsson and Joyce Gyoba – who met when she came to town. Her daughter, with her own daughters now in university at Western, now runs their London Sylvans. One of her granddaughters will probably follow her grandfather and mother at the Ivy Western business school. Her son is an architect in New York City and he and his partner have a beautiful spot in upstate New York where the family meets in the summers. Since Jim passed away in 2014, Rosemary has had the support of family and friends in London and in Florida in adjusting to single life.