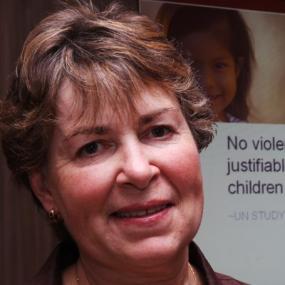 Judi began her professional journey by practicing a more reactive, “crisis-management” form of healthcare as an ICU nurse in Calgary, and later in India at a village clinic and Tibetan refugee camps. When she and her husband decided to move to Vancouver, she enrolled in UBC’s BSN program because she wanted to supplement her international experience with a comprehensive nursing degree that included public health and education. UBC Nursing provided her with exactly what she was looking for – a more holistic perspective on public health.

“At first, I thought that public health nursing might actually be a bit boring, given that I had worked in fast-paced and dramatic ICU wards and refugee camps,” says Judi. “However, one of my professors completely changed my outlook by sending me into the community to interview people and search for disease markers. Through this, I realized how exciting it could be to go upstream from intervention and look at prevention as a vital aspect of public health.”

After graduating from UBC in 1972, Judi worked as a nurse in a Taiwanese school clinic, where she witnessed firsthand several health issues pervasive among the youth there, including child abuse. These experiences, along with her UBC education, helped her to realize the concept that would shape the rest of her career, and that would have a positive impact on literally millions of people around the world: violence and abuse represent a critical public health issue that is best confronted by encouraging social change through a proactive, preventative and educational approach.

Today, Judi is National Director for the Canadian Red Cross’s RespectED: Violence and Abuse Prevention program, which spans across Canada and internationally in 28 other countries. To date, RespectED has fostered partnerships with community-based organizations, volunteers and grass roots programs around the world, educating roughly 6.5 million children, youth and adults about the realities of violence and abuse and empowering them to stop it.

Through RespectED, Judi has integrated violence prevention education into several facets of Canadian society. The program has worked heavily with the education system, training over 4,200 youth facilitators who run workshops and build campaigns in their schools. RespectED has also engaged with First Nations communities to mitigate abuse, and has worked with Hockey Canada, where it is now mandatory for all hockey coaches to enter into its educational programs.

Some of Judi’s most rewarding experiences have come from her international work with RespectED. She recently travelled to Myanmar where she educated about 30 local individuals in violence prevention, who then worked with villagers in remote rural communities. “It was so inspiring to watch lights going on in people’s eyes as they began to understand the issue [of violence] and that they have the power to stop it,” she remembers. In 2013, RespectED visited a Muslim school for teenage girls, where Judi taught the students that they have the same rights as men and that they have the choice not to enter into child marriages. “Many of these girls used to leave school by grade seven to enter into marriages, but most are now staying until grade 12,” Judi proclaims. “It is very inspiring to witness this sort of positive impact of the program on a societal level.”

Judi attributes much of her professional success to her nursing education and experience. “Nursing helped me to realize that violence is a public health issue, and it gave me the all-around perspective, and the skills and knowledge necessary to set up systems to manage this issue, and to handle crises,” she says.

These skills are particularly important to Judi’s latest major initiative – facilitating an international disaster response school. RespectED is working to integrate violence prevention theories and practices into the standard operating procedures of disaster response groups around the world. By educating first responders, Judi hopes to equip them to handle and mitigate the violence and abuse that is typically inherent in disaster situations.

In 2007 Judi was awarded the prestigious Florence Nightingale Medal for her work in breaking the cycle of abuse to children, youth and adults.This is the highest international honour in nursing bestowed by the International Committee of the Red Cross.

Through all of her adventures and successes, Judi has not forgotten the importance of her nursing education. “I am pleased and proud to be a UBC Nursing alumna,” she declares, “and I would encourage current and future nursing students to be fully aware of the incredible breadth of the spectrum of opportunities that nursing opens to you.”

For more information about the RespectED program, including how to get involved, please visit:redcross.ca/respectED.