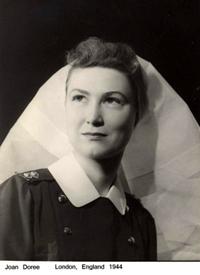 Joan had originally hoped to become a dietician; however, due to the high cost of a university education, decided that nursing was the closest affordable option. The cost of attending nursing school back then was a mere $100. Upon graduation, she found her first nursing position in the rural, poverty-stricken town of Prelate, Saskatchewan. She then worked at St. Michael’s General Hospital in Lethbridge, Alberta.

The war was in progress and she went to Vernon, BC, the site for basic training for military nurses. After D-Day, in July 1945, she went to Britain in a hospital ship over very rough waters. People could hardly stay up for being sick. Fifty non-combat troops (such as herself) went on this boat that was not built for war. Huge boats like the QueenElizabeth and Queen Mary had convoys but boats like the one she was on did not. They landed at Liverpool in the dark (as lights were out in wartime) and had to wait for ten days to decamp because other boats had priority.

Joan was a Nursing Sister from 1944 to 1946 with the Royal Canadian Army Medical Corps. In this role, she was posted during the war in Basingstoke, England, an Army Special hospital that specialized in plastic surgery, neurological disorders and psychiatric cases. Until her death she maintained contact with a patient she assisted in England who resided Ottawa.

After her post in Basingstoke, Joan was stationed in Taplow, England at a general hospital before spending six months at a hospital in Germany. The food prepared in the allied army was by German civilian cooks and thus, army food was very good, something she remembers with great pleasure. The nurses had a German woman doing their laundry. Instead of money, which had absolutely no value, she wanted soap for payment, so they gave her as much soap as they possibly could.

“Drive Carefully Death is Permanent” was a road sign they saw often as they drove in their army vehicles, which incidentally, had no doors and only small canvas seats. The roads were terrible so they did have to drive carefully or they would likely have died in a road accident.

When veterans returned from the war they were given an allowance by the Department of Veterans Affairs (DVA) for an education, a house or a small business. Norman MacKenzie, then president of UBC, was sympathetic to veterans, Joan remembers. She opted for the university education at UBC that her parents could not afford before the war. After entering her chosen specialty of public health nursing, she went back to take the courses she should have taken at the beginning – chemistry, zoology, biology. Once she graduated, she worked at Vancouver General Hospital and St. Paul’s Hospital in Vancouver and Shaughnessy Hospital which was the military hospital at the time. She also worked in the downtown east side for the Vancouver Health Department and was a Liaison Nurse and then Assistant Supervisor and later Supervisor at Sunny Hill Health Centre for Children.

Then, for the second time in her life she had another educational opportunity that would be paid for: The Federal Health Training Grant allowed her to obtain a Masters in Public Health Administration in Berkley, California from 1966-67 and paid her $250 per month!

Throughout her career, Joan maintained strong affiliations with the nursing community. She was involved with the BC History of Nursing Association, was a board member for the RNABC for two terms in the 1970’s and 80’s, and was a founder of the BC Federation of Nurses. Once established, this was a body (supported by the RNABC) from which nurses could request funds for education and research.

In retirement Joan was a volunteer tutor at the Carnegie Community Centre for ten years.