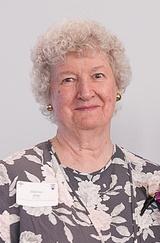 Glennis is a member of UBC Nursing’s infamous and close-knit BSN Class of 1958, which contributed more than its fair share of national leaders in nursing practice, education, and research during the latter half of the 20th century. She grew up in New Westminster, BC, and graduated from Vancouver General Hospital in 1957 and from UBC Nursing in 1958. She received a Bachelor of Journalism from Carleton University in 1969 and a Masters of Arts in Communications from Simon Fraser University in 1981.

Glennis’ diverse working life has included nursing at Maple Ridge Hospital; public health nursing in New South Wales, Australia; and instructing at the Royal Columbia Hospital, New Westminster. She was an Assistant Editor for The Canadian Nurse from 1963 to 1969, and an editor/reporter for the Canadian Press from 1969-1972. She states that she found the most interesting aspects of her career the combination of nursing and journalism for The Canadian Nurse and the Canadian Press, and later as a freelancer in medical journalism.

From 1973 she has been a freelance writer, editor and writing consultant, working mainly with individuals and organizations in health care areas. A special area of interest is history of nursing and health care. She has a long list of publications and other professional credentials, including editing eight volumes of proceedings published by various health care associations or universities. One worth mentioning is Legacy: The History of Nursing Education at the University of British Columbia 1919-1994. As a writing consultant she has been a resource person for many workshops and a guest speaker at public lectures and meetings. Glennis presents numerous classes and public speeches on the history of nursing, usually attired in a historical nursing costume.

In 1998, she wrote a text on writing skills for student nurses: The SMART Way: An introduction to writing for nurses (Toronto: Saunders). With a co-author, she is expanding and updating the fourth edition of this text: Introduction to Writing for Health Professionals: The SMART Way will be released by publisher Elsevier Canada in Spring 2019.

Glennis has been granted numerous awards including the UBC Nursing Division Award of Distinction 2000, the John B. Neilson Spaulding Award in 2004 for the long standing contribution to the history of health care in Canada, the UBC Blythe Eagles Volunteer Leadership Award in 2010, an Honorary Doctor of Letters from Kwantlen Universitry College in 2006 and in 2016 the UBC Applied Science Dean’s Medal. She is a founding and Honorary Life Member of the BC History of Nursing Society.

Material provided by the BC History of Nursing Society archives
http://bcnursinghistory.ca/archives/biographical-files
Edited by Glennis Zilm