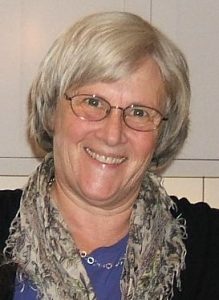 Nora was drawn to the nursing profession at an early age by her mother and her great aunt who were proud registered nurses. Nora’s mother, Ruth Cochrane Mann, was a UBC graduate (class of ’47) and her great aunt, Lillian Findlay Parrott, was a VGH graduate who became a public health nurse in Hawaii, and whose stories made an impression on Nora as a child (I could become a nurse and travel the world!). She was also drawn to attend UBC by her father, Arthur Mann, a graduate of the first pharmacy class in 1949.

Memories of her undergraduate years include a wide variety of clinical placements around the Lower Mainland including a public health nursing placement with the Burnaby Health Department during fourth year and two rural experiences. Classes and labs were held in the Wesbrook Building where she remembers good times with her classmates, particularly working on group projects and presentations as well as many social events. Nora loved the whole experience of university life at UBC: living on campus for the first two years, taking courses in other faculties and the fun of getting to know Vancouver after growing up in a small town on Vancouver Island. The class of ’73 has stayed in touch through frequent reunions and an annual newsletter diligently coordinated by Sue Taylor.

After graduation, she moved to rural Manitoba working in a small hospital at first and then in a new community health centre. A family move to Calgary gave her an opportunity to work in acute care psychiatry before another move to Johannesburg, South Africa where she became involved in a primary health care clinic in the township of Alexandra. Her longstanding interests in global health and primary health care are rooted in this pivotal experience.

Returning to Vancouver in the mid-1980s, Nora was delighted to be accepted into the MSN program to further her education. This turned out to be a great opportunity to focus on community health, nursing leadership and an introduction to Canadian health care policy. Her thesis topic – a history of provincial public health nursing in BC in the 1940s and 1950s – incorporated these interests. The connections made during the MSN program and several years of sessional teaching in the School of Nursing have turned into decades-long friendships with wonderful colleagues.

A new career path opened in 1990 when she was hired by the former Registered Nurses Association of BC (RNABC) to coordinate a policy program known as New Directions for Health Care. It was an exciting time to participate in a nursing association’s policy development process and member engagement activities with many opportunities to meet with nurses throughout the province. When RNABC’s New Directions program concluded after four years, Nora was ready to launch her own consulting firm with the hope of carrying out similar projects and having flexibility in her schedule to take on international consulting contracts. She was fortunate to have Verna Huffman Splane as a wise international nursing mentor and eventually to become part of a small global health networking group with Verna and other colleagues.

Nora’s international consultations took her to Japan, Nepal, India and South Africa where she worked with leaders in nursing associations and with faculty and students in schools of nursing.  Many of these projects had a common theme of mobilizing nurses to advance primary health care in their communities and to influence change in national health systems. A career highlight was getting involved in UBC’s partnership project with the Guru Nanak College of Nursing in India in conjunction with the Canada India Education Society.  She recalls enjoying close collaboration with members of UBC’s Guru Nanak Advisory Committee, many trips to India (and many follow-up reports!) and subsequent involvement in the UBC-Baba Farid Partnership Advisory Committee.

During the past decade, her consulting has focussed on projects with First Nations health organizations in BC in areas of community health planning and nursing leadership. She worked for several years with the Association of Registered Nurses of BC in its formative stages and remains deeply interested in the role of provincial, national and international nursing associations.

Since 2003 Nora has lived in the Comox Valley where she enjoys gardening, reading, family visits and planning her next trip. She is grateful for her nursing heritage, her strong UBC education and her continuing connection with the School of Nursing as an adjunct professor.