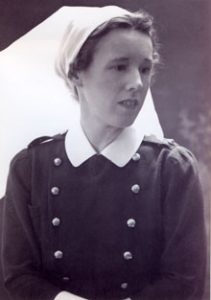 In 2008, a distinguished and unique alumna who was both a nurse and a social worker passed away. Jean Dorgan (BASC(N) ’34) was born in New Westminster in 1910, the first of four children. She attended St. Ann’s Academy – grades 1 – 11 and graduated at 16. In 1934 she graduated from VGH School of Nursing and from UBC with a BASc(N) where she studied public health nursing. 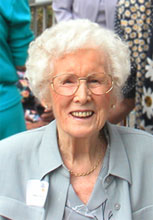 Following graduation, she worked for the Welfare Department at VGH finding placements for long term patients. Four years later, she was employed by the newly established Metropolitan Health Department as a public health nurse at a salary of eighty dollars per month. She had offices in two Vancouver schools – Laura Secord and Beaconsfield. Her responsibilities included checking children, inoculations, well baby clinics and new baby visits. Her concerns were for the welfare of the poor immigrant families in her district.

In 1942 Jean enlisted in the Royal Canadian Army Medical Corps and was called to active duty shortly after. She left for overseas in 1943 as a member of a 200-bed casualty clearing hospital. After a short period in England, her hospital was shipped to Italy where they saw action at the third battle of Casino when Mussolini was defeated. Her unit was transferred to Holland as a member of the 21st Army Group. Jean remained in Holland until the end of the war.

Following her service in WWII, she rec

eived an MSW at the University of Toronto in 1949. She did not return to nursing but believed her dual experiences as a nurse and social worker were a distinct advantage in her career. After a short stint at Shaughnessy Hospital, Jean returned to Toronto and taught in the School of Social Work at U of T for nine years as a field work supervisor in the Toronto Welfare Department. 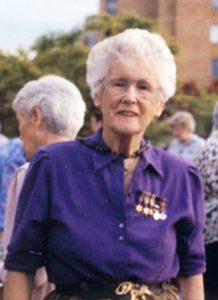 Her next move in 1956 was to Ottawa where she was hired by the Federal Government as a consultant for the Dept of Health and Welfare, Mental Health Division.

She ended her career as Head of the Appeals Section of Canada Pension Plan. Jean retired in 1975 and returned to BC. She lived in Richmond until 1988 and then returned to her birth place – New Westminster. She was an active member of St. Peter’s Catholic Church and a volunteer with Irving House in New Westminster. She provided information to a memory project that includes oral histories of more than 1000 veterans. Jean was interviewed about her experiences as a nursing sister. She was described as a very charming and gracious lady who led a very interesting life. Jean died December 2, 2009 at age 98 after a brief illness with family and friends holding her hands. Her wish was fulfilled to live independently to the end. Two days earlier she had attended Mass and gone out to lunch with friends.

The BC History of Nursing Society has a CD of an interview with Jean Dorgan which is available at the CRNBC library.

Story Courtesy of the BC History of Nursing Society, 2009.
http://bcnursinghistory.ca/archives/biographical-files