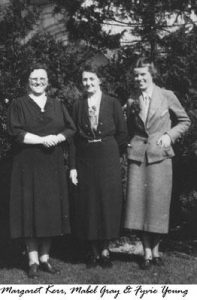 Fyvie graduated from The Vancouver General Hospital School of Nursing and from UBC in 1931. She was the daughter of Dr. Henry Esson Young who was Provincial Health Officer of BC from 1916-1939.

In 1933 Fyvie was a public health nurse at the Cowichan Health Unit on Vancouver Island and a year later was promoted to supervisor. She was awarded a fellowship by the Rockefeller Foundation and attended Teacher’s College, Columbia University where she received a Master of Arts Degree. Following graduation, she was appointed secretary of the Division on Maternal and Child Hygiene by the Board of Governors, Canadian Welfare Council. In 1937, she returned to UBC where she joined Director of the School, Mabel Gray and faculty member, Margaret Kerr to teach the course, Practice of Public Health Nursing. The school had received a three-year Rockefeller Foundation grant which enabled the hiring of a well-qualified supervisor to visit all the field work agencies to assist them in planning student field work. Fyvie remained on faculty until 1940. She married and was an active member of the Vancouver General Hospital School of Nursing Alumnae Association.