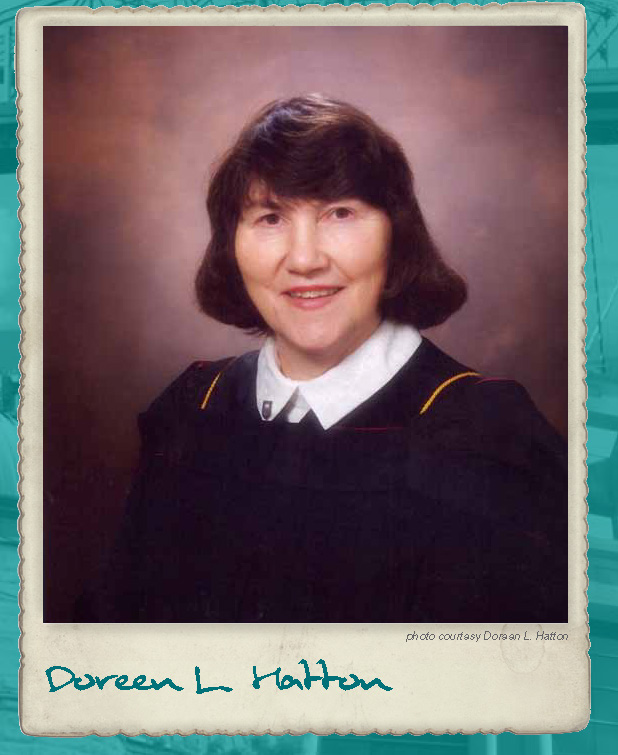 Doreen was born in England but spent part of her early childhood in Paris, France. She attended school and college in England, obtaining her RN and SCM (State Certified Midwife) before marrying and moving to Canada.

Doreen’s career path as a nurse was formed at a very early age. By the age of 3 she was always caring for others and deciding how to ‘make them better’. Her grandmother nicknamed her Florence Nightingale when she sat night and day comforting her sick brother.

At the age of six Doreen was herself hospitalized for several weeks following ear surgery. She loved to watch the nurses and to help once she was allowed out of bed. One night the baby in the crib next to her began to cry. When the nurses did not come immediately, Doreen crept into the baby’s crib to comfort him. This was not unusual for Doreen as she often crept into her baby sister’s crib at home to comfort her when she cried. However, the nurses were horrified when they found her even though the baby had stopped crying and had fallen asleep. Doreen’s bed was moved closer to the nurses’ station where they could keep a close eye on her. She would watch the nurses coming and going and observe everything they did and said. She was already deciding how she would do things to help children who were sick once she became a nurse.

As a teenager Doreen was trusted by a neighbour to babysit their toddler who had type 1 diabetes. She quickly learned the devastating effects of this complex disease and became acutely aware of the lack of knowledge and understanding and community resources available to support the families of these children. Doreen was instructed to carry sugar every time she took the toddler out to play, and to feed sugar to the little girl if she showed signs of a “low blood sugar” reaction. The symptoms to look for included the toddler becoming pale, confused or having a seizure. This sounded very scary! Doreen’s first attempt at research was by observing the toddler and her reactions to food and activity levels. She experimented by providing the little girl with small amounts of food in the form of milk and bread before taking her outside for active play time. When fed before the activity, the little girl could play happily without experiencing ‘low blood sugar’ symptoms and Doreen decided that it was better to prevent these than to have to treat them. This information she shared with the parents.

Doreen never forgot this little girl or the problems and fears faced by her parents. As a nurse, clinician, researcher and educator, Doreen dedicated her long outstanding career and extensive volunteering efforts to improving the quality of life for infants, children and adults living with diabetes. Through her volunteer work and professional career she has witnessed the dramatic rise in the incidence of diabetes in infants and toddlers as well as in adults. She also became acutely aware of the low level of community resources available to support all people with diabetes and their families.  She has worked to raise awareness of this complex, life-long disease and through her ground-breaking research, innovative education programs, written resources, advocacy, lobbying governments for essential supplies, supportive outreach programs, working for change and sharing her extensive knowledge, she has significantly improved diabetes care and education, not only in BC and Canada, but internationally. In 1994, Doreen was part of a delegation of diabetes specialists which visited China and Mongolia to share knowledge about diabetes management and care. Together with other nurses and physicians from Canada and the USA who formed the delegation, she will never forget this challenging experience. Her written accounts outline the severe difficulties experienced by children with diabetes in these countries.

Doreen’s career in Canada spanned over four decades, during which she took special time off to complete her BSN and MSN degrees in the School of Nursing at UBC while still maintaining some clinical practice. A highlight of her career was her position as Clinical Nurse Specialist with the Diabetes Program at BC’s Children’s Hospital from 1987 to 2003. Doreen describes this as being the most rewarding, inspiring and satisfying experience imaginable. She will always be grateful for the amazing opportunities and experiences she was afforded in this privileged position and the very special colleagues with whom she worked.

Doreen’s pioneering research into the needs of parents caring for an infant or toddler with diabetes was completed as part of her Master’s degree at UBC, and was the first nursing literature available to describe the challenges faced by this high-risk population. She travelled nationally and internationally to present her findings. Her paper was cited in research conducted at Yale University and Doreen was invited to present her research findings to Harvard medical students and staff at the Joslin Diabetes Institute in Boston. Her work is still cited and used world-wide today.

In 1993, following completion of her MSN degree, Doreen received the BC’s Children’s Hospital Medical Staff Award for Excellence in Nursing Practice. She used the award to fund a study on the benefits and cost-effectiveness of managing children newly-diagnosed with diabetes in an outpatient setting. She travelled to the UK and the USA to study Diabetes Day Care Programs. Prior to Doreen’s study, all children with newly-diagnosed diabetes in BC were admitted to hospital for over a week for stabilization. Her early research into the emotional needs of children and their parents indicated that an outpatient mode of care could greatly reduce the trauma and stress of hospitalization and help to stabilize blood sugar levels more rapidly. By 1996 Doreen had convinced key decision makers and medical staff at Children’s Hospital that a Diabetes Day Care Program could work, and an overwhelmingly successful pilot project led to the launch of the new program in Vancouver. This unique program became the first of its kind in Canada and the basis for similar day-care facilities throughout North America. By changing the care of newly-diagnosed children from an inpatient model to an outpatient day care program, Doreen also helped to save millions of dollars for the health care system!

Doreen’s subsequent longitudinal study, begun in 1998, and supported by a grant from the Canadian Diabetes Association, tracked a cohort of families living with a child with diabetes from infancy through childhood. It identified challenges and gaps in our understanding of the growing child’s needs in pre-school, school and the community. Findings resulted in ongoing interventions and advocacy to ensure a safe and supportive environment for the growing child.

Doreen’s award winning manual Diabetes and You was written in the 1990s in response to the identified needs of children, parents and caregivers. It sold more than 10,000 copies and was revised and reprinted over many years. It was used as a primary resource for diabetes educators in pediatric centres across Canada, the USA, New Zealand, the UK, France, Germany, China and Mongolia.

Not only have children benefitted from Doreen’s care; adults and seniors (particularly those living in long-term care facilities) also benefit from her outreach and community programs. When she had completed her full-time career at Children’s Hospital, she founded the Diabetes Education Academy to provide updated information on diabetes care and management for health care providers. The course content was based on the current Clinical Practice Guidelines for the prevention and management of Diabetes in Canada. Together with her teaching partner, her ongoing work included building and presenting outreach education programs for First Nations Communities in remote areas of BC.

As a volunteer and partner with the Canadian Diabetes Association (now called Diabetes Canada), Doreen was consultant to the CDA Branch (Pacific Area) Executive Director on the special needs of children and youth. She represented CDA on a local TV program in Vancouver dedicated to informing the community about diabetes. She was an avid volunteer teacher for groups of parents attending the CDA Summer Diabetes Family Camp over many years and did volunteer teaching in schools, in the community and in support groups. Doreen was also a member of  multiple planning committees and a presenter at many CDA sponsored Symposia, Workshops and Conferences held in communities throughout BC. She organized and co-chaired the first Pediatric Interest Group Meeting for DES at the 21st Annual Conference held in 1994.

Doreen’s work has been dedicated to the children and families she has cared for and, through education and outreach programs, has increased public awareness of the needs of children with this devastating disease. Doreen has been described as “An Angel” come to save them by many of the hundreds of families and children whose lives she has touched. Many of the children she taught have now grown to adulthood and, of these, many have chosen career paths as nurses, physicians or educators in diabetes care inspired by Doreen’s teaching.

In 2011 Doreen was honoured by the City of Vancouver as part of the city’s 125th Anniversary Celebrations, and in recognition of the 100th Anniversary of International Women’s Day which began in 1911. Doreen was selected as one of “Twelve Remarkable Women” recognized by the city as “COMMUNITY BUILDERS” and honoured for their extensive volunteer work in assisting those in need within the community. Doreen was selected for commitment, dedication and advocacy to improving the lives of citizens living with diabetes. Her name had been submitted by an amazing group of adults now at University, who had once been Doreen’s young patients at Children’s Hospital.

Doreen’s relationship with UBC School of Nursing lasted long beyond her time as a BSN and MSN student. She was an Adjunct Professor with the School of Nursing at UBC for many years where she inspired students to follow in her footsteps. She has fond memories of her student years, and of the dedicated professors who inspired, supported, guided and filled her with knowledge. In particular, Doreen thanks Dr. Sally Thorne for her continual guidance, inspiration, encouragement and support, not only when she was a student but throughout her career. Among many other faculty members who touched and influenced her life, Doreen remembers Janet Gormick who taught the very first class Doreen attended  at UBC as a returning RN; Dr. Connie Canam (her thesis chairperson); Dr. Helen Niskala; Janet Ericksen; Anne Wyness; Mary Register and epidemiology classes; Dr. Virginia Hayes; Dr. Carol Robinson; Carol Bassingthwaite whom she also worked with at Children’s Hospital and Kathy O’Flynn-Magee, who was a professional colleague and special friend.

Throughout her busy career Doreen has always been supported and assisted by her husband John. Together they raised a family of three children all of whom graduated from UBC in different faculties.