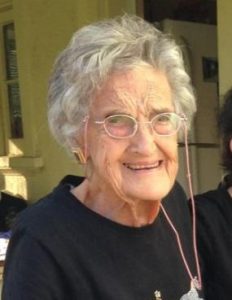 Lucille “Lucy” Giovando, born on September 5, 1918 of a pioneer Ladysmith family, died on December 13, 2015 in her 98th year in Ladysmith after a long and productive life. Predeceased by her father John Dominic Giovando, her mother Victoria Giovando, her siblings Dr. Larry Giovando, Marie Doumont, Minnie Honeyman and Tony Giovando, Lucy was survived by a niece and nephews as well as numerous great-nieces and great-nephews.

After obtaining a BASc(N) degree in nursing from UBC in 1942, Lucy worked as a public health nurse in a number of locations in B.C. including Kelowna, Kamloops and Cumberland. She then went to the United States where she obtained her Master’s Degree in Public Health. She then moved back to B.C. where she worked for many years as a public health nurse, eventually becoming administrator of the nursing staff initially at the public health units in North and West Vancouver, and subsequently at the public health unit in the Burrard District of Vancouver.  As a former colleague recalled in the public tributes after her death, “She was always available [for advice],usually with a laugh and a smile. Our paths didn’t cross for awhile but after we both retired I would visit with her at various VGH Alumnae events and at the Kerrisdale Community Centre. She was active with so many organizations and always a leader.”

Lucy had a wonderful sense of humour and an infectious laugh, both of which were most often directed towards herself. She was adventurous and strong willed, and loved life and people. She was particularly fond of travelling and visited, among other places, Mongolia, the Orient, South East Asia, Latin America and Morocco. In the 1950’s she worked for a year as a nurse for the World Health Organization in El Salvador, an adventure that provided her with many interesting memories.

In her later years, Lucy returned to live in the family home in Ladysmith, where she still had many friends and relatives. A memorial mass was held for her at St. Mary’s Catholic Church in Ladysmith on January 23, 2016.