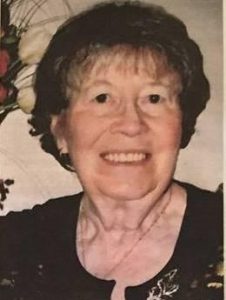 Beth’s nursing involvement spans five generations and counting. Her great aunt, Ada Mary (Law) Cooper trained as a nurse and midwife in London England in the late 1800s. Her mother, Winnifred Mather (Lowe) Uttke, trained as a nurse at the Vernon Jubilee Hospital, graduating in 1924. Following stints at private duty nursing in Vancouver and San Francisco, Winnifred returned to Vernon, becoming an afternoon/evening supervisor at Vernon hospital. Interviewed by Beth about that time (and recorded in the BC History of Nursing archives), Winnifred said that the experience she gained caring for patients was absolutely critical to her ability to look after her own babies, including Beth, out on the farm.

Beth herself worked as a nurse’s aide in the summer months during grades 12 and 13, and went into nurse’s training at the Royal Inland Hospital in Kamloops, graduating in 1958. She remembers that Margaret Ferne Trout was their Nursing Education instructor and was very influential in her student career. As Beth recalls, Margaret “always said ‘do not make any important decisions in the heat of the moment…sleep on it and don’t quit nursing on a whim’….a very wise lady!” Later, leaving her three school-aged children in the care of their dad and his mother so that she could relocate to Vancouver to advance her education, she obtained her BSN from UBC in 1975.

With degree in hand, Beth went on to work as a public health nurse at the West Kootenay Health Unit for over 20 years. In that role, Beth felt privileged to be part of the BC provincial committee that lobbied for the introduction of mandatory child car seats in the late 1980’s. She also had a lot of involvement with the schools, doing eye and hearing checks, educating parents about the importance of immunizing their children to prevent outbreaks, and holding immunization clinics.

For Beth, the most enjoyable part of public health nursing was home visits to the new mothers and babies. They shared a lot of information including prevention techniques, weighed the babies, and monitored their progress if there were any problems. The metal baby scales in a great canvas bag were quite cumbersome, and they packed them up and down the steep stairs of West Trail which kept all of the nurses fit. On occasion, Beth would discover a baby with an infected umbilical cord or a fractured clavicle, and was then able to refer them to their medical practitioner which expedited their treatment. She especially remembers how heartened she felt to see the high school graduation of many of the new babies she had visited 18 years earlier. 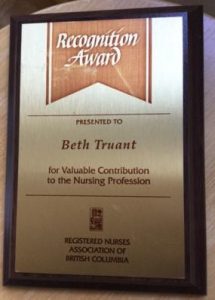 Over her forty year career, Beth witnessed many changes in health care. She saw the advent of penicillin, which was the first antibiotic and considered a “miracle drug” to fight infections. When it first came out in a clear crystalline form in 1950’s, penicillin was short acting, and Beth recalls that it required multiple doses by injection which caused lots of sore spots on people’s hips. Later, in approximately 1956, the drug came in a white, thick long acting form called aqueous procaine penicillin G (injectable). It was mainly used to treat pneumonia and infections. Liquid forms of penicillin and many other antibiotics were later introduced during her career as a nurse.

Beth also has strong memories about changes in the way mental health concerns have been managed. In the 1950’s there were no psychiatric wings in the general hospitals, so patients had to leave their families and communities for an extended period of time for treatment which only exacerbated their stress levels and stigmatized the patient and family. Insulin coma therapy and electroconvulsive therapy (ECT) were the only forms of treatment prior to the introduction of psychotropic medications. Insulin coma treatment involved giving patients a large dose of insulin which put them into a coma and then they put down a tube to administer a sugar-like solution to bring them out of the coma. The shock of this was supposed to help with the psychiatric condition. Regarding ECT, there were no anticonvulsants drugs so the ECT was quite violent and it involved quite a few people holding all the limbs when they went into a convulsion to make sure the limbs didn’t break. With the advent of anticonvulsants, ECT treatment has evolved from that rudimentary approach and has greatly improved.

Beth also recalls that, without psychotropic medications, it was hard to control the patients’ behavior and the job of the nurses was mainly surveillance, which at times was a scary experience. There was a “locked door policy” which made the care setting almost more like a jail than a hospital. When patients first came in, they were observed every minute under lights for 24 hours in the “suicide room” until they could decide just how serious the case was and what ward they would go on and what treatment they would have. Beth has no memories of art or music therapy, activities or rehabilitation, or other more humane approaches to help patients with all their symptoms. Because of this, she found mental health care in those early days a sad and frustrating experience, as there was little to help heal the patients. 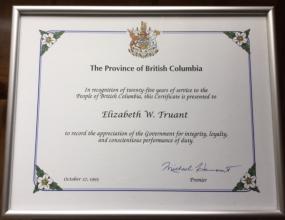 Throughout her career, Beth was actively involved in supporting the profession. She was honoured with a recognition award by her local chapter of the RNABC, having served various periods as chapter Secretary and President. She loved flying to Vancouver for the annual meetings, which were a major event in those days. In 1993, the BC provincial government, recognized Beth with a certificate “In recognition of over 25 years of service to the people of British Columbia…. to record the appreciation of the government for the integrity, loyalty, and conscientious performance of duty.”

Following in Beth’s footsteps, her daughter Valerie Pitman, a University of Calgary grad, became a public health nurse with the Interior Health Authority in Trail, BC. Beth’s youngest daughter, Julie Aitken, was influential in encouraging her daughter, Anastasia (Tasia) Taylor, to pursue a nursing career; Tasia graduated with a BSN from University of Victoria in 2016 and has also now entered public health. In keeping with the wider family tradition, Beth’s niece, Tracy Truant is also a UBC nurse, having obtained her BSN and MSN, with PhD completion expected soon. Beth considers it a great thrill to see the legacy of caring, helping and healing being passed down through the generations. In the summer of 2015, Beth met with Ethel Warbinek and recorded an oral history of her career for the BC History of Nursing Society. Many of her nursing books have been passed along to the Selkirk College Nursing program for their library.

Now in her 80s, Beth remains curious about everything and highly connected to the world. Among her recent travels, with travel partners daughter Laurie Truant and her husband Neil Honkanen, were an extended trip to Israel and Palestine, and a visit to Haida Gwaii. In 2016 she toured the Maritime Provinces and in 2017 explored the West via the Rocky Mountaineer. Next up on her agenda is a cruise through the Panama Canal with stops in Central and South America, including Machu Picchu.

Currently a Layminister and choir member at the Anglican Church in Trail, Beth attends a weekly meditation group and also two Bible studies sessions. For Beth, church work seems to be just one more extension to her legacy of a life long dedication to learning and helping!