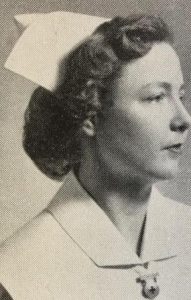 Born in Alberta, Vin Crane moved to BC in 1936 and in 1942 joined the Women’s Royal Canadian Naval Service (Wrens). As a Wren, Vin trained as a wireless telegrapher and worked at Special Operations stations, which were part of the larger British Bletchley Park code-breaking “Enigma” program.

After the war, Vin graduated from VGH in 1950 and from UBC with a BSN in Public Health Nursing in 1951. She joined the provincial department of health as a public health nurse and worked in a variety of settings throughout BC. In 1961 she completed a Master’s degree in Public Health at the University of Michigan and was awarded the American Public Health and American Universities Honor Awards.

On her return to BC, she continued her career in Public Health Nursing as a Nursing Consultant for the BC Ministry of Health (1961-1974), Assistant Director (1974-75) and Provincial Director of Public Health Nursing (1975-85). When she commenced her consultation role, she was responsible for developing the BC Home Care Program. After setting up demonstration projects in Kelowna, Vernon and Saancih, the program expanded throughout the province. Under Lavinia Crane’s leadership as a consultant and as a Director, the provincial department initiated many research projects.

When Vin retired in June 1985, she was presented with the President’s Award from the Public Health Association of British Columbia which recognized her commitment to addressing issues such as preventive health actions and ensuring involvement in decision making by those affected.