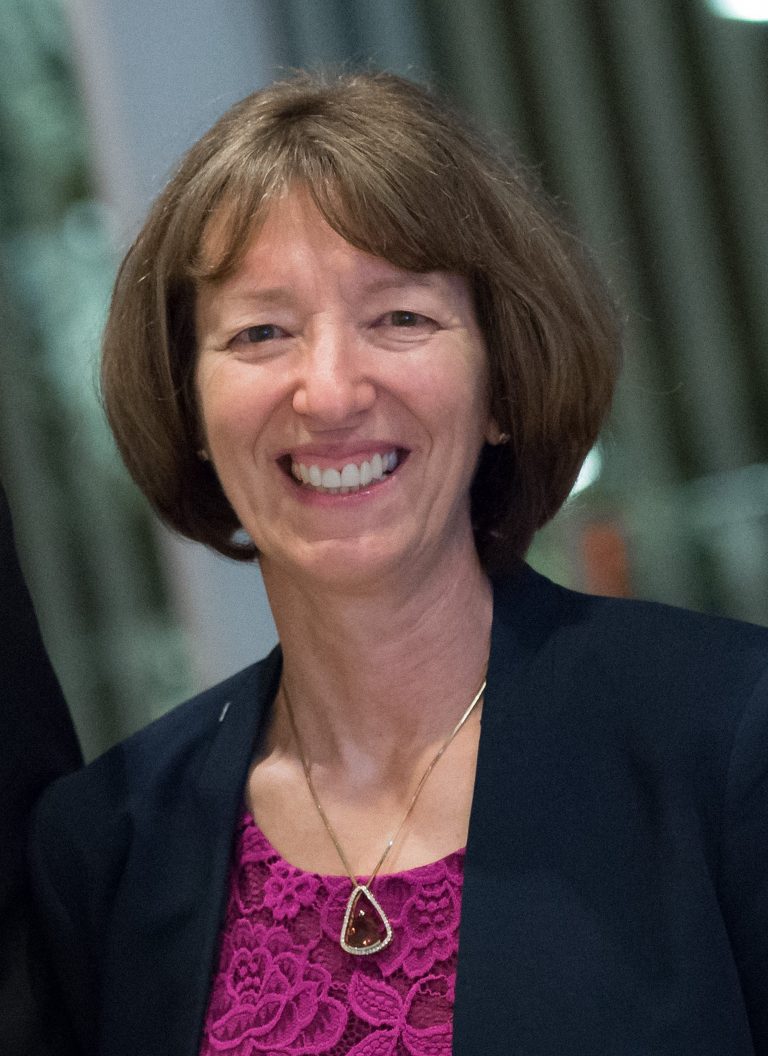 Susan grew up on a cattle ranch in rural British Columbia and was eager to spread her wings when she graduated from high school. She was nominated by her local School Board to attend ‘UBC Visitations’ in the spring of her grade 12 year – a program designed to introduce prospective students to the university. She had a wonderful week on campus and decided that she would like to attend UBC. Although academics were always important to her, at the age of 17 the potential social opportunities significantly influenced her decision to apply to UBC.

Initially, Susan wasn’t convinced that a career in nursing was the right fit for her. She knew that she enjoyed the biological sciences and was interested in health care, however it wasn’t until her second year of university, after researching the profession and learning about the many career opportunities within nursing, that she made her decision.

Susan chose the UBC School of Nursing because of its strong history of excellence in nursing education and she felt that she could gain the knowledge and skills that would prepare her for a fulfilling career.

During her university years, Susan was a varsity athlete in the sport of rowing and, when she wasn’t in class, she could be found in the War Memorial Gym and on the waters of Coal Harbour and Burnaby Lake training with her team. Following graduation, she continued to train and compete nationally and internationally for several years. In the 1980’s her sport was put on the back burner while she focused on her career and a young family.

In September 1978 as a new grad, she began her career as a Community Health Nurse (CHN) with the City of Burnaby. She joined a health care team that provided nursing, rehabilitation, and long-term care services to community clients with acute, chronic and palliative care needs. This experience was pivotal to her development as a nurse in community health. She was able to put into practice much of what she had learned during her education at UBC, and developed the confidence and skill to function as a clinician and client advocate in the community. The support and mentoring that she received from seasoned community health nurses on her team were invaluable.

Her position with the City of Burnaby came with a new Chevy Chevette.  Having been a poor student for years, it was exciting to drive a brand-new car!  These Chevettes however, were outstanding in their capacity for functional challenges. If one were to apply the UBC Model for Nursing, they struggled with their protective and reparative subsystems! In one instance, a door fell off onto the street when it was opened. Thankfully, generous and well entertained neighbours of a patient helped to put the door back into its opening and called for roadside assistance.  This was before the advent of cell phones!

In the fall of 1981, Susan moved to Ottawa, Ontario and for the next five years was employed by the Ottawa-Carlton Regional Health Unit as a Home Health Coordinator.  As a member of an interdisciplinary health care team, she was responsible for assessing client needs in acute and community settings, coordinating client services, initiating and completing residential care transitions, chairing client conferences and ensuring that reassessments were carried out at regular intervals. Her interest in palliative care led her to the University of Ottawa where she completed the palliative care certification course. This knowledge would serve her well later when she returned to British Columbia to continue her work in Home Health. Among her many memorable experiences in Ottawa was going to the ‘sugar bush’ of one of her colleagues and returning with a gallon of delicious maple syrup!

On her return to British Columbia in 1986, Susan rejoined the Home Health team in Burnaby where she worked as a community health nurse.  As well as managing a caseload in the community, she mentored many UBC and BCIT nursing students during their community health rotations and she chaired the Home Health Nurses’ Education Committee.  The HIV-AIDS epidemic was raging in Canada in the 1980’s and 1990’s and many people with AIDS were living with, and dying from this disease.  Community Health Nurses identified that, in order to provide high quality care for this population, they needed to increase their knowledge and skills. In response, Susan was able to recruit Dr. Peter Jepson-Young, a person with AIDS and founder of the Dr. Peter Centre in Vancouver, to provide excellent staff education. Dr. Peter maintained his connection with Burnaby Home Health until his death in 1992.

The 1990’s were a tumultuous time for health care in British Columbia and Home Health wasn’t spared the effects of change. There began a concentrated focus on restructuring the delivery of health services through regionalization. The regional health care model was designed to bring health services ‘closer to home’. The objectives were to improve health provision by streamlining services, to develop methods for measuring service quality and evaluating outcomes, and to create economic efficiencies.  This presented an opportunity in Burnaby Home Health for Susan in 1997, to pilot the new role of Intake Coordinator.  She screened all health care referrals from community, public organizations, clients, families, acute care settings, and physicians, for eligibility for health care services. Eligible referrals were forwarded to the appropriate home health services within Burnaby. In this role, Susan chaired local and regional committees and working groups seeking to improve practice and provide input into operational issues.  The Intake Coordinator role transitioned into a permanent nursing position in 1999.

Being ready for a change, Susan joined the Burnaby Home Health Case Management Team in 1999. In this role, her primary focus was to help people with complex health care needs stay at home and to avoid unnecessary or premature admissions to hospital or care facility. She assessed and referred clients to appropriate services, developed and adapted care plans to meet their goals, evaluated outcomes, and facilitated access to resources such as home support, adult day programs, assisted living, and residential care. She was particularly interested in strengthening professional practice and represented Burnaby on regional Case Manager working groups and committees.

As the Case Manager role expanded to serve an increasingly complex client population, and the case management team grew, a Case Management Clinical Practice Leader position was created in 2004, and Susan assumed this role with enthusiasm. She was responsible for providing clinical expertise, leadership, education and consultation, to the Case Management team. In 2004, case managers were required to learn a radically new method of carrying out client assessments that required significant change to their practice. Assessments were carried out and recorded on a lap top computer with clients while in their homes. These assessments could flag client health risks and guide care planning. This new assessment process, the interRAI MDS 2.0, was a time consuming and monumental task to both learn and teach. More than one case manager threatened to throw their new lap top out the office window! Susan participated in local and regional program planning and development as it pertained to case management. She developed lifelong friendships with staff that she worked with in Burnaby as well as with colleagues from other areas in Fraser Health.

Susan provided nursing care, case management and advocacy to hundreds of people during her career, however there is one remarkable family for whom she has enduring appreciation and respect. She had the opportunity to care for and walk beside a man, his wife, and their children as they transitioned through his seventeen years of living with ALS. Their courage and determination were inspirational as they dealt with the challenges of this fatal motor neuron disease. In the wee hours of an August morning in 2004, she received the expected call from her patient’s wife. His wish was honoured; he had died in his own bed. As she drove in the darkness to their home to pronounce him, Susan reflected with gratitude on the amazing opportunity she’d had to care for, and learn from this committed and loving family.

In 2007, Susan’s interest was piqued by a new regional position – Manager, Assisted Living Program for the Fraser Health Authority (FHA).  She applied and was the successful applicant. This position required managerial leadership for, and collaboration with, assisted living case managers and forty-two contracted assisted living sites throughout the health authority.  She headed up a project to create a process for ensuring a high quality, efficient and cost-effective program for assisted living residents. She was tasked with developing and implementing an Assisted Living Performance Measurement Framework. She addressed this initiative by creating a committee and several working groups comprised of representatives from all stakeholders, as well as a contracted expert in measurement of client satisfaction. This work was groundbreaking and resulted in collaboration and publications with the State of Ohio Department of Aging and speaking engagements at Simon Fraser University, University of Victoria and provincial and national conferences. An unanticipated outcome of the performance measurement initiative was the identification of a group of assisted living residents for whom this care model was not appropriate. These were people with moderate dementia. They were not safe to live independently yet they were not eligible for residential care and assisted living wasn’t a good fit. With health authority support, she embarked on an initiative to develop a successful hybrid model of care for this population in collaboration with a contracted FHA Residential Care facility. After eight eventful years in this position, Susan decided to leave FHA to take a more relaxed approach to work and life. Still, with a passion for serving the older adult population, she joined the Vancouver Coastal Health Adult Day program team as a relief clinical coordinator. She held this position until her retirement in 2018.

In retrospect, Susan’s experiences as a UBC student in Nursing and a Varsity Athlete have impacted her life and career in myriad ways. The value of being able to function effectively on a team, whether it be a health care team, an athletic team, or a member of a board, can’t be overstated. The attributes of a strong work ethic, commitment to a common goal, and a deep appreciation and respect for fellow humans have served her well during her career.  She is grateful for the terrific opportunities that were afforded her within her profession that have challenged her and caused her to grow both as a nurse and a person.

Susan currently rows recreationally, is a national rowing umpire and enjoys officiating at regattas during the competitive season, and is a member of several national rowing committees. She sits on the board of Rowing British Columbia as past president and is an executive on the Board of the Burnaby Lake Park Association. She volunteers at a local residential care facility – during the pandemic via FaceTime, telephone, letters, and cards.

Together with her husband, Susan supported two of their children to reach their dreams of competing for Canada in the sport of rowing at the 2012 and 2016 Olympic Games. She delights in spending time with their three children, their children’s partners, and baby grand daughter. Her mother lives locally and she enjoys visiting with her and learning from the wisdom of a life well lived.