From “Slipstick,” which was a UBC Engineering Undergraduate Society annual yearbook, containing pictures of the Applied Science graduating students.

In 1967, having graduated from Hamilton General School of Nursing, I decided I  would rather further my education than join the workforce as a Registered Nurse. I was interested in both the Diploma Course in Public Health and a Diploma Couse in Psychiatric Nursing at UBC. I always had an interest in Mental Health thus, I decided on the program in Psychiatry. As both programs required that I have a year of clinical experience, I had to demonstrate that my final year of Nursing was a paid internship.

I had just returned from touring Scandinavia and was drawn to the mountains of BC. It was an interesting decision, as I did not know one person in BC. I subsequently met my husband, who was a law student, the first weekend I was there. We were both living in Acadia Camp … old army huts for mature students.

Our class was small, with only five Registered Nurses. We had most of our classes at the School of Nursing – our psychology and sociology courses were with students from other programs. Our Clinical experiences were at Lionsgate, St. Paul’s, and Essondale (later known as Riverview) Hospitals. Thus, I got to know Vancouver very quickly. The Nursing Instructors were most helpful and learned; it was both an interesting academic and clinical year. 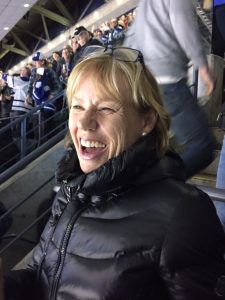 In addition to school, I so enjoyed skiing, biking, and hiking with the friends I made at Acadia Camp. We were married the following year and I subsequently was hired as a Team Leader at the new Psychiatric Hospital on Campus at UBC. We made our way to Kingston via Calgary. With three small children, I considered finishing my BSN but decided taking a Psychology Degree at Queen’s would give me greater flexibility with a family and an opportunity to work part-time at Hotel Dieu’s Department of Psychiatry.

I was later hired as a Nurse Educator at Queen’s University School of Medicine. It was a very interesting position coordinating the Clinical Skills for the medical students, supervising other Nurses in our department, teaching history taking and physical exam skills in a hospital setting, hiring community physicians to teach clinical skills, administrating clinical examinations for undergraduate medical students, and international medical licensing examinations. I worked with a physician to develop a Physical Examination Manual that was used by several Medical Schools in Canada; published two papers with physicians on teaching Clinical Skills, and created communication skills courses for Medical Students with other educators. I so enjoyed developing relationships with many interesting medical students who went on to do “great works” in various specialties in Medicine.

For 20 years, Queen’s Medical School was very generous to me; honoring me with 3 teaching awards. Queen’s University gave me a Special Recognition Award for outstanding contributions to the learning and working environment. I had a wonderful retirement party with a gift of a painting by a local artist.  I always thought it was a privilege to be a Nurse and have the opportunity to create a career that was less well travelled.