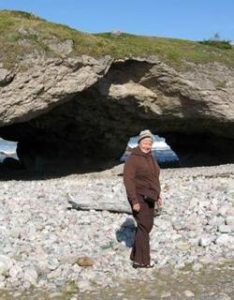 She has worked in a range of positions, including as a community health nurse consultant in Australia, as the director of the Nova Scotia Sociobehavioural Cancer Research Network Satellite Centre and at the Dalhousie University School of Nursing as Associate Director of Programs and Planning and since 2001, as a Course professor.

Carol has provided her expertise to countless committees and organizations including as Chair of the Community Advisory Committee of the Metro United Way in Nova Scotia, President of the Canadian Cancer Society, a member of the Steering Committee to Reduce the Use of Tobacco in Canada (Health Canada) and Vice- President of the Board of Directors for the Public Health Association of Nova Scotia.

She has received a number of awards, with the most notable of these including both the Government of Canada’s Golden Jubilee Medal in 2003, as well as the Canadian Volunteer Medal and Certificate of Honour in 1996.

Despite all her accomplishments, “I don’t think I chose nursing, and I don’t really think I embraced nursing as a career until after my children were in school” she says. She’d had several different experiences as a community health nurse working in Germany doing prenatal and postnatal care, and being recruited to teach at Mount Saint Vincent University. “I’d have to be honest and say I drifted along and then suddenly it really struck me that this is a very exciting profession that affords me the honourof being a part of other people’s lives.”

Through community health nursing, Carol was positioned inside “organizations with wonderful volunteers”. Volunteers who worked hard with no thought of personal gain and were solely focused on improving their communities. She was truly inspired by these people, and began to think that she should continue with nursing and to try to constantly improve the profession. She then pursued an education degree followed by a health education degree to try to look more closely at the volunteer health promotion aspect.

As her career progressed, she became President of the Canadian Cancer Society, Nova Scotia Division and later, Vice-President of the National Division – a major voluntary organization. At this point she had received her doctorate and was doing research as well as teaching. Her research interest has focused on understanding the linkages between the health care volunteer and the licensed health professional that will best support a healthy community. “I’ve always been fascinated with interdisciplinary practice. My research and interests have evolved out of practice.”

As she worked as director of a sociobehavioural cancer research unit, her focus on quality of life grew more prominent. She feels strongly that volunteering is highly correlated toquality of life both for the giver and receiver of care. “People who are committed to their community and volunteer are healthier” she says.

Carol looks back on her career and major accomplishments and her response is quite modest. “I was honoured to have been a teacher and honoured to have worked in the voluntary health sector.”

She loves teaching, “I enjoy watching people’s behaviour change as they learn and grow.” When someone changes it’s not usually because of one person or thing they’ve learned, it’s a long process in which many people take part. “I love seeing students come in first year with very concrete views of what nursing is – giving needles, being quick and being able to plug in the heart monitor – and then being with them in fourth year when they are asking; ‘Why are there so many cases of cervical cancer in that small area or how can the health care system be changed so that everyone has equal access to health?’”

Although she’s received a number of honours throughout her career, she acknowledges that credit for her accomplishments does not lie with her alone. She is quite resistant to the elaborate nature of many of these awards and their ceremonies, but has learned that they can offer some important opportunities to support her positions.

In 1996, when Carol received notice that she would be honoured with the Government of Canada’s Volunteer Medal and Certificate of Honour, she left on a cycling trip she had planned with a friend, and told no one for more than ten days while she thought about what to do. “Most of the time I was mouthing off about the government and the queen spending all that money on pomp and circumstance when there are people in our country who are hungry and homeless. I was really in conflict. I didn’t want to go to Ottawa and be pampered for three days.” It was against everything she believed in. Upon return from the cycling trip, she received a call with congratulations from a woman she knew who was now working in Ottawa. Carol told her she wasn’t planning to go, but the woman insisted. “Carol” she said, “you have to! Every opportunity you get, you can talk about the importance of volunteering, and it will give you a voice that you can’t achieve any other way.”

Her husband, who had early onset Alzheimer’s, was not able to go, so she invited her father, who at that point was in his early eighties. “It was a spectacular experience” she says. “My dad was so thrilled about what his little girl had done, and to be presented to the Prime Minister. I kept asking him ‘are you getting tired dad?’ ‘No, certainly not’ he would respond.” The experience highlighted for her the importance of family and friends in our lives and was really important to Carol because it acknowledged the importance of volunteer work. She is still very active in local volunteer agencies such as the Victorian Order of Nurses and the local Autism Centre.

“I’ve had a great career” she says. “And if I could give one message to others, it would be the importance of being involved in community and with volunteers. Nursing has opened those doors for me. It is a discipline that is critical for the nurturance of healthy individuals, families and communities. Nursing, in my opinion, is the stimulus that builds connections that make life worth living. I am very proud to be a nurse.”