Born in Brandon, Manitoba, Janice had a wonderful childhood travelling as an “army brat” as her father’s military career took the family to CFB Gagetown in New Brunswick, the Canadian Infantry Brigade Group in Hemer, Germany, and finally CFB Shilo in Manitoba.

Janice was a pediatric nurse from Manitoba, who found her way to Vancouver after holding nursing positions in New Orleans (Tulane Medical Centre in the Dialysis Department) and Montreal (Royal Victoria Hospital). She obtained her MSN from UBC School of Nursing in 1977 and worked as a clinical nurse specialist at BC Children’s Hospital. Returning to UBC School of Nursing to enter the PhD program in the second year of its inception in 1992, she was one of the first cohort of nursing PhD program graduates to cross the stage in the spring of 1997. 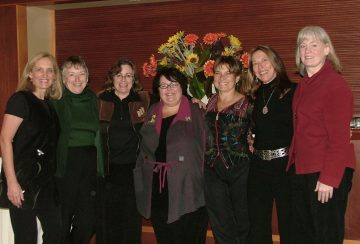 On completion of her PhD, Janice was appointed as Assistant Professor to the University of Victoria School of Nursing, which at that time had a Langara Campus cohort. She loved the engagement with students and the continuing scholarly work. In addition to critical reflections on optimizing pediatric care, Janice had a fierce commitment to issues of equity and power imbalance. Her dissertation research reflected a feminist post-structural examination of power discourses within the clinical nursing practice context. She continued to write and do research in applications in women’s health and inquiry methodology.

In 2004 Janice had a bicycling accident that ended her academic nursing career. Over the ensuing years, as her abilities gradually declined as a result of that catastrophic brain injury, she and her husband Gary enjoyed life to the best of their ability. She died on December 29, 2018.

Janice will be remembered by her colleagues as a wonderful friend and collaborator. She had a fine intelligence, fueled by a fierce passion for feminism and human rights, and loved using carefully honed ideas as a means to challenge what she saw as the problematic status quo in society and health care.  She will be long remembered.

Her obituary can be found at: https://www.dignitymemorial.com/obituaries/north-vancouver-bc/janice-mccormick-8106616

Janice McCormick (R) with a group of her Langara-based University of Victoria faculty colleagues, all of whom have strong UBC connections. Lynne, Paddy and Rosalie were the other three members of that initial group of UBC PhD graduates, with Colleen Varcoe following in their footsteps 6 months later, and Vicki a few years later. Ginny had previously been a tenured faculty member at UBC. And over time, Paddy, Colleen and Vicki all returned to UBC to hold tenured faculty positions at the School.

Among her scholarly works were: