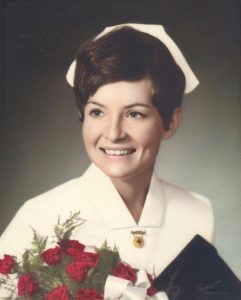 I remember the day I decided to become a nurse. It was February 29, 1960. I was a naive 13- year-old boarding student at Queen Margaret’s School in Duncan, BC when my appendix blew up. Matron rushed me to hospital where I had surgery. It took a day for my mother to make the ocean voyage from Vancouver to Duncan, and in the meantime, I met the most amazing, loving and caring nurses. I wept as they shaved my abdomen from nipple line to mid-thigh (standard procedure for a laparotomy then) because my mother had always told me if I shaved my legs they would grow in black and hairy. I could only imagine my tummy looking like that! They reassured me that wouldn’t happen and they looked after me closely til Mum arrived. I fell in love with them and nursing on the spot. I then studied Latin for five years and practiced my printing assiduously in the belief it would help my career. Biology might have been a better choice.

It is fifty years since I graduated from the Vancouver General School of Nursing (1969) and that young 13-year-old made one of the best decisions of my life. I got engaged in my third year and was required to take my intended to VGH’s Nursing Director (not just the Director of the School) to ask permission to marry before graduation. My intended declined so I went alone for an audience with Miss Richmond and was able to convince her a) I was not pregnant and b) my parents approved.

Although psychiatry was my first choice upon graduation, the powers that be assigned me to the Case Room, because that is just how it worked. In the six months I worked there, I learned a huge amount from some amazing midwives under the command of the strict Mrs. Jones. A terrifying moment was when a classmate came in with a massive postpartum hemorrhage. I was always proud to be a small part of the team that saved her life.

In Boston, I worked at the Boston Lying-In Hospital from 1970 to 1972. It was as archaic as its name implies. It was the last bastion of “Twilight Sleep,” a combination of morphine and scopolamine to relieve the pain of childbirth. When women woke-up they didn’t remember their labour and praised their doctors to the sky. Their babies woke up a day or two later. I chose to have my son at a community hospital, arriving fully dilated so no one could interfere with his birth. And, although he was four weeks premature, I took him home on day two.  Even at age 23, I knew hospitals were not safe places for healthy people. I’ve been eternally grateful to Miss Davies, an Australian midwife who taught obstetrics when I was an impressionable young woman at VGH SON. She instilled in me the belief that pregnancy, birth and breastfeeding were natural and normal and, in most cases, did not require medical intervention.

In 1972, I moved to Montreal and worked at the Royal Victoria Hospital, in the ancient Women’s Pavilion, again in Labour and Delivery. I remember one day charting “routine low forceps delivery.” The residents managed to get forceps on a baby’s head even as it was crowning. Anesthesia and bottle feeding were the norm. Only a fringe element had heard of Lamaze. Again, I chose a community hospital for the birth of my daughter. She arrived minutes after I arrived at the hospital after shovelling my car out of a Montreal snow storm, affirming aerobic exercise may make labour shorter and less painful.

When we returned to Vancouver in 1973, I worked in Labour and Delivery at Lions Gate Hospital on and off for six years and I got my BSN from UBC (1978). I also had a short stint as a clinical instructor at VGH. Then in 1979 we moved to Saudi Arabia for three and a half years of an amazing cultural experience. One great thing about being a nurse, particularly a Canadian nurse, is health care organizations where ever you go are eager to hire you. I quickly got a job in a primary health care clinic with the Saudi Ministry of Defence and Aviation. My focus was maternal child health education and my highlight was working with my Arabic speaking colleagues to produce a book which was used across the country. A lowlight was when a Bedou woman snatched her baby away from me in the middle of a baby bath demonstration for a room full of new mothers. She clearly had not understood my halting Arabic when I asked if I could use her baby for the demo and I didn’t understand the Bedou belief that if someone cast an evil eye on her baby it would suffer misfortune or injury. In retrospect, given the close family ties and communal living, I’m not sure these women needed baby bath demonstrations. They may have just come to my classes to see the crazy Canadian.

In 1983, I returned to Canada and immersed myself in UBC’s MSN program. It was a rigorous and gruelling program and only two of us graduated within two years. We used to say “as nurses we have to get twice as many credits as MBA students to prove we are half as good!”  Elaine Carty was my mentor and my salvation as I struggled to use grounded theory for my thesis “The Experience of a First Pregnancy after Age 35.” Qualitative research was on the fringe of being acceptable. A few years later when I sat on an ethics committee to review a qualitative research proposal from an eminent nurse scholar, the chair finally approved it saying “I suppose it will do no harm.” I was a charter member of Sigma Theta Tau.

My Masters degree was a ticket to a series of fascinating jobs. First, I planned and implemented a Nursing Outreach Program for BC and the Northwest Territories. I learned working in rural and remote communities was very different from working in a tertiary hospital. Next, I was hired into my first administrative job. I had three years as the Director of Obstetrics and Quality Assurance at Lions Gate Hospital. Lynette Best gave me grounding and mentoring in leadership and management that stood me in good stead the rest of my career. I directed the renovation of the maternity unit and I led the hospital’s accreditation process, both fabulous learning experiences. I also persuaded the doctors that fathers should be able to attend cesarean sections, only to have a distressed father pull a knife on the surgeon in the first week of the new policy!

From 1990 to 1993, I was Vice President of Nursing and Patient Services at the “new” Salvation Army Grace Hospital. It quickly became clear that the Sally Ann was not the best fit with a tertiary obstetrical hospital and I fell afoul of the old guard by advocating for a Baby Friendly Hospital, whirl pools in the labour and delivery unit and developing plans and obtaining funding to build a birth centre. The executive team was fired and Women’s Hospital came into being. I spent the next year licking my wounds and working as an independent consultant. I did a particularly interesting project with the Queen Charlotte Island (now Haida Gwaii) Community Health Council to develop a plan to govern and deliver their health services.

Then, as my children had grown and flown, I decided I was ready for another adventure in the Arab world. I accepted a job as Director of Nursing for a 500-bed hospital in the United Arab Emirates. My new job was an enormous challenge from day one. When I arrived, I was surprised to learn that I was actually responsible for five hospitals, 22 Primary Health Care Clinics, 105 schools, the public health system and the ambulances. I was also responsible for about 1500 nurses from 52 different countries although the Human Resources department didn’t seem to have a list of their names or where they were assigned. My boss, His Excellency, the Undersecretary of Health, told me it was my job to implement Canadian nursing standards. I spent five fascinating years on this Sisyphean task and have a million stories I could tell, including dining regularly at the palace with the equivalent of the Queen Mother and her entourage.

When I returned to BC in 2000, many hospitals did not see the value of international experience so I leapt at the opportunity to become a regulator with the RNABC which later became CRNBC. I spent 13 years as a policy wonk researching and writing board reports on a wide variety of issues that affected nurses and nursing. The work was interesting and it was a relief to only be responsible for myself. I used my work with quality practice environments to write a thesis and I became a Fellow of the Canadian College of Health Leaders. I also became an adjunct professor for my alma mater, UBC.

Then just as I was thinking of retiring at age 65, a tantalizing opportunity arose to become the Director of Policy and Practice for the College of LPNs. The College was undergoing a huge transformation and it was a great way to spend the last five years of my career. I had great colleagues and amazing staff. I wouldn’t change a minute of the past 50 years. 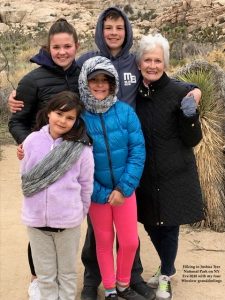