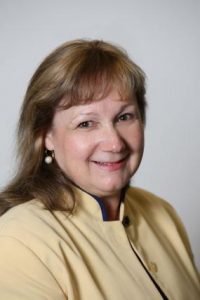 Kris received her BSN from UBC in 1986 and her MSN in 2001. Enrolling in the nursing program enabled Kris to “bridge her two callings”, that of a love of business and management, systems and processes, and her desires to relate to others with care and compassion. Kris found that her education was “such a great foundation to the rest of [her] career and life.” To illustrate, Kris says that assessing, planning, implementing and evaluating – all activities she learned and honed in the SoN – are processes she has used in every single aspect of her life. “These are steps you use whether you are helping a child or buying a house.”

Kris says she had outstanding role models while she was a student and notes that those role models were at the front and centre of everything going on at the school. She named Sally Thorne, Elaine Carty and Carol Jillings in particular. What she learned from them as models, “is that what you want to do is completely doable”, even if looks like it isn’t. For example, Kris worked full-time and volunteered in the community while raising her children, who appreciate, understand and support her in her career. She did what she saw modeled by her mentors – who always displayed a ‘can do’ attitude.

Kris was an active student while at UBC, involved in the Nursing Undergraduate Society (NUS) as the sports representative from 1984-85 and president from 1985-86. She was one of the pranksters who painted a bright blue ‘N’ on the Engineering cairn! Kris also worked for the UBC Intramural/Recreation program while a student and learned valuable organizational skills as the Director of the Women’s Volleyball program. Kris continues to be actively involved in the UBC Intramural/Rec and UBC Nursing Alumni groups.

Her career illustrates how she has managed to combine her clinical and administrative skills. Currently, she is employed by the Provincial Health Services Authority (PHSA) as the Corporate Director, Accreditation and Patient Experience. She is responsible for oversight of the Patient Care Quality Office and for supporting activities related to quality, safety and accreditation at the PHSA operated agencies including: BC Children’s Hospital & Sunny Hill Health Centre for Children, BC Women’s Hospital and Health Centre, BC Transplant, BC Provincial Renal Agency, BC Mental Health and Addiction Services, BC Cancer Agency, BC Centre for Disease Control, and BC Emergency Health Services. In addition to her adjunct faculty role for the UBC School of Nursing, she is an Accreditation Canada surveyor and has worked both nationally and internationally on five continents. Before her current position, Kris was Program Director for BC Children’s Hospital’s partnership program at the Children’s Centre at Mount Saint Joseph Hospital, Head Nurse of Pediatrics at Mount Saint Joseph Hospital, and a nurse with various responsibilities at Shaughnessy and BC Children’s Hospitals. Kris has taken positions with increasing responsibility as her career has progressed, always focusing on the needs of the patient, program development, and quality and safe patient care.

Kris has been active in the College of Registered Nurses. She carries out site reviews of nursing schools, helping them comply with the expectations of the College. She won an Award of Excellence in Administration in 2003 in recognition of her efforts. Kris is past president of the UBC Nursing Alumni Association and Registered Nurses Foundation of BC. In 2010, she was elected to the Executive of the BC Lower Mainland Chapter of the Canadian College of Health Leaders (formerly CCHSE). In 2011 Kris was appointed to the Board of the College of Pharmacists of British Columbia, and, in 2013, to the Canuck Place Children’s Hospice Board. Kris currently serves as Expert Faculty for the Canadian Patient Safety Institute’s Knowledge Translation and Implementation Science.

Kris has been nominated for the Woman of Distinction Award in Health and Wellness in both 2002 and 2008. Additionally, she was a selected member of the 7th Governor General’s Canadian Leadership Conference. She has received the Ted Freedman Award for Innovation in Education, Best International Presentation from the National Association of Children’s Hospitals and Related Institutions (NACHRI), and many other awards, including the 3M National Quality Award in 2016.

Kris is married and has three almost grown sons; however, according to them, they are never leaving home because they love living in Vancouver. She is active in many community organizations and served on the Board of Little Mountain Baseball (LMB) Little League as Challenger Division Coordinator for over a decade. She and her family have been active participants in helping children with cognitive and physical challenges play baseball. In 2009, the LMB Challenger Volunteers won the special City of Vancouver Youth Award for promoting community engagement and active living through recreational, fitness and sport-related activities. In 2014, the team was selected as the first international team invited to the Little League World Series Challenger game in Williamsport, PA.

When asked what she is most proud of, Kris says she is most proud of her three boys and of the nurses and health professionals whom she has mentored over the years. She is proud to see them now emulating her life motto, the same motto which her own mentors taught her: be actively involved in work, the community, and do many things that look like they cannot be done.