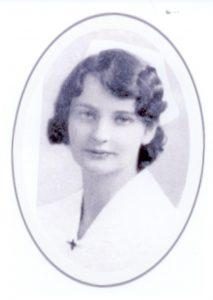 Geraldine (Homfray) Langton graduated from the Vancouver General Hospital School of Nursing and from UBC in 1931. Following graduation she was employed as a public health nurse in Chilliwack, BC. She described this as a 2-two-nurse area: one was rural and other was the town of Chilliwack. Both nurses were recent UBC graduates.

Their first objective was to make themselves known so they contacted local organizations, such as the Fair Committee and were given a large table which they used to exhibit a variety of healthy fresh foods along with posters. This attractive display received “great and encouraging remarks.” The only flaw was that they used a pound of butter which was not the local Fraser Valley brand, so they quickly changed it. As it was at the beginning of the depression, the local doctors were a bit apprehensive about the nurses believing they may “steal some of their clients.” If someone had a communicable disease such as mumps, scarlet fever or measles, a sticker and placard were tacked on the house and the whole family was quarantined. They had no local skilled supervision. “You were on your own and you had to make decisions. If there were major decisions regarding health, you either could phone Victoria, which wasn’t a very reasonable, so we had to use our own thinking skills to try and resolve the problems. “No clinics were available for dental care or vision checks. The one clinic that was available was the Travelling TB clinic run by Dr. Lamb and nurse – Miss Peters. Geraldine was concerned about vision problems affecting school children, so she contacted a doctor in New Westminster who began visiting every six months to check eyes. She also arranged for a paediatrician to visit during the agricultural shows. Nothing of this kind had been done before and the services were well received. She conducted baby clinics, providing advice and educational materials as well as home visiting of new mothers.

During the summer months the local children would go swimming in the in the sloughs and when school resumed in September she was inundated with impetigo, ring worm, scabies and nits. Some of the children from poorer families could not get away in the summer so Geraldine approached the IODE and a group of volunteers to see if a week’s holiday at Cultas Lake could be arranged. This was successful, but the children did not have swim suits or proper clothing for camp, so Geraldine along with volunteers, made shorts and bought T-shirts for them. No zippers were available so evenings and Saturdays were spent sewing buttons and making button holes.

In 1934, Geraldine was promoted to supervisor at the Cowichan Health Center on Vancouver Island. This was a larger unit with four nurses. They provided bed side care, dressing changes, new baby visits and were responsible for home deliveries. “So we always had our bag packed to be called at any time of the day or night.” She describes mental health as “it hadn’t come to the fore then. We handled it by giving people reassurance, talking things over, but there wasn’t any referral to a Mental Health Clinic.

In 1936, Geraldine became supervisor of Unit 2 at the newly formed Metropolitan Health Committee in Vancouver. She found this work too structured compared to the rural settings which she preferred, so after two years she resigned and enrolled in the Master of Arts course at George Peabody College for Teachers. Upon completion, she was invited to be a member of the staff at the UBC School of Nursing as Field Work Supervisor. She resigned in 1943, perhaps to be married.

In 1964 Geraldine returned to public health nursing in Abbotsford, BC. Many services had been added such as such as mental health clinics as she said “there were many more services to call upon, but people were still people. I found I settled into the niche very quickly.”

After six months, she was moved to Haney. One major change she experienced was the closing of Riverview Hospital with some patients being transferred to boarding homes in her district. She made regular visits and was “shocked at seeing these elderly people sitting down doing nothing and watching TV. I thought there must be something more if they were going to live in a community.” Using her initiative, as in her earlier experiences, she mobilized a body of volunteers to organize outings, arrange sing songs, dances and always food. Interested in rehabilitating some of the people, she tried to find odd jobs for them. One man came regularly to her house to do gardening work. He was so reliable that she gave him a key and he would go in and make himself a cup of tea. “He became quite a different man.”

Geraldine was asked to teach again at UBC based on her public health nursing experiences in rural communities, but turned it down because of family responsibilities.

In retirement she sat on the garden council at her apartment building and tried to recruit volunteers to help restore the garden. On reflecting back on her career she said: “If I had to live my life over again, I would certainly go into the same field of work – public health nursing or something related to the community.”

Geraldine (Homfray) Langton is a wonderful example of a UBC School of Nursing graduate.