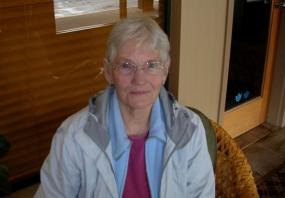 Joan McDonald was born in 1936 in Thorsby, Alberta, the second of six children. Her mother had been a teacher and her father had a small flourmill. When she was a year old the family moved to a remote area on the Slave River, where her father opened a logging camp. Access was by boat or float plane in the summer and dog team in the winter. Eventually they moved to Yellowknife where Joan attended grades 1-3. She did grades 4 and 5 at Minstrel Island when her parents owned the store, hotel and post office. They then lived on Salt Spring Island and the family home there is now the Salt Spring Sailing Club. Joan graduated from the Consolidated School at Ganges. She chose nursing as her future profession, considered the program at St. Paul’s Hospital, but settled on the degree program at the University of British Columbia, graduating in the class of 1959. Upon graduation she took a position in pediatrics at the Maple Ridge General Hospital and worked four months before marrying Denis St. Denis in 1959.

They went to live at his logging camp in Jervis Inlet where they set up a house trailer. Here she perfected her culinary skills by cooking for a crew of up to six men. In 1960 their first daughter, Michele, was born. They had two more daughters, and two sons, as well as adopting a First Nations boy. Three of the children went on to post secondary education: Tony received his doctorate in Electrical Engineering from UBC, Anna her Bachelor of Science in Economics from the University of Victoria, and Nicole received her registration from the Western College of Massage Therapy. Rick and Jack have made successful careers in the lumber industry.

While the children were young the family lived in logging camps at both Jervis Inlet and at Head Bay, half way between Gold River And Tahsis. Joan moved several times while the children were growing up so that they could attend schools as close as possible to where Denis had his logging camp. So two years in Horseshoe Bay, and two years in Gold River, as well as summers in the camp, and then in 1973 to a farm in Chemainus. All the children graduated from Chemainus high school, except Michele who, sadly, passed away from cancer of the lymph glands at age 16. Denis sold his logging business in 1977 and turned his hand to cattle farming.

Joan, intensely family-oriented, was a stay-at-home mom but she kept very busy working at St Joseph’s School where the children received most of their elementary education, and with church activities. She was a member of St. Joseph’s School Board for many years and is a long time member of the Catholic Women’s League of Canada. Joan also taught the Christopher Leadership Course for 15 years. In 1996 they moved to a smaller farm in Ladysmith and continue to reside there. They no longer farm, but enjoy the space when the children and grandchildren visit.

Joan always had an interest in music and played the piano from a young age. When she turned 65 she decided to celebrate in two ways. She had her ears pierced! And she began taking saxophone lessons. Subsequently she joined the Nanaimo Community Band, where the main criteria for membership is to turn up for practice (this band is not to be confused with the acclaimed Nanaimo Concert Band). The band performs at seniors’ dances and church functions as well as community events like the Festival of Trees. In 2011 Joan developed Wegeners, which effected her lungs and put an end to this career, although she stills plays occasionally for her own enjoyment. Joan loves glass in all its colours and textures and has had stained glass as a hobby for 30 years. Recently she bought a kiln and is experimenting with different types of fusing.  She is also an ardent reader and enjoys many types of hand crafts.

Joan and Denis love traveling in their truck and camper and have been to the Yukon, Churchill, the North West Territories, and across Canada as well as often visiting the southern states. There are still many places they plan to investigate.