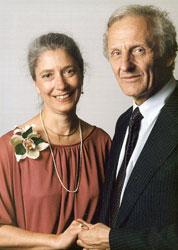 Bernadet grew up in Edmonton and graduated from the Edmonton General Hospital School of Nursing in 1957. Afterward, she and three classmates “moved out into the big wide world” and she worked for a few months in the emergency department at Sacred Heart Hospital in Spokane. She married Edward in 1958 and they moved back to Edmonton. She worked in various positions within obstetrics in Edmonton, moving from staff nurse to supervisor. After their marriage she and Ed moved to Vancouver so that he could attend UBC’s architecture school. One funny anecdote Bernadet shared from her early days is that when she went into nursing she was very impressed with the pristine look of the uniforms nurses wore at the time and at how nurses carried themselves in those uniforms. “One of the most devastating experiences as a 17 year-old was discovering that these uniforms were held together by safety pins and clips which were taken off along with the buttons so that they could be starched.”

By the time she began her BSN at UBC, Bernadet already had ten years of nursing practice behind her. She wanted to be able to move into positions that would allow her to support nurses more effectively and make improvements in health care for patients. Bernadet obtained her baccalaureate degree while working full-time at St. Paul’s Hospital, though she did do one full-time year of the BSN at UBC, graduating in 1968. She was impressed with the commitment the faculty had to accomplishing their many goals. Bernadet was one of the six “D” students- the first group of graduates who were already RNs. She remembers that sometimes they were resented because other students didn’t like the fact that they didn’t participate in extracurricular activities, such as “the leg auction.” They didn’t appreciate that all of these students were working full or part-time and had families and therefore had to set rather strict priorities for themselves.

From 1979 to 1989, Bernadet served as Director/Vice President of Nursing at St. Paul’s Hospital, where she had worked for over 20 years. Before that she had been a staff nurse in the emergency and obstetric departments and became Head Nurse in the newborn nursery in 1963, Clinical Instructor of obstetrics in 1966 and Clinical Coordinator responsible for infection control, ambulatory care services and obstetrics from 1968 to 1979. She initiated and was responsible for developing the Family CentredMaternity Care Program at St. Paul’s in 1972, along with the space renovations required to implement it. This new service was one of the first in Canada and was designated by the provincial government as the only alternate program to the (then) Grace Maternity Hospital in Vancouver.

Wanting to have a lasting impact on BC nursing practice, Bernadet enrolled in the Master of Science Degree program in Health Services Planning and Administration in 1978 at UBC, graduating in 1981. “I was a jaded old lady by then!” Again she did this degree while working full-time as Director/VP of Nursing at St. Paul’s.

At about this time, the entire nursing profession was undergoing attack from the “business model experts” in health care who were undoing much of what nurses had strived to build over the years. Funding shortages were beginning to impinge on patient care and nursing was identified as the cause of the problem. There were nurse revolts at this time, many were fired, and health care was reorganized. Bernadet’s team of nursing directors was responsible for all nursing provided in the hospital. These directors were fired and in place of their commitment and expertise, 19 inexperienced “consultants” were hired. Another reason the nurses were targets, Bernadet remembered, is that doctors felt that nurses were running the hospital and they didn’t like that. Bernadet said that in fact they were running it, through middle management positions, “and it ran beautifully.” The improvements that nurses made to some of the systems in the hospital that led to doctors accusing them of “running the show” included standardizing the booking system in the OR and standardizing the equipment used in the OR. One improvement they attempted to make but were not successful in implementing, was instituting the practice of nurses being able to trial any equipment they would  have to use.

For all these efforts, the nursing directors and Bernadet herself, were fired. There was now no nursing department, no unique identity; nursing became one of many services, similar to any other. “All of this undermined the power of nurses to provide excellent patient care. So much was lost during this time. You can’t not have these types of leadership positions and function well individually as nurses or as professionals,” Bernadet recalled of this time. During this period, Bernadet remembered the young woman who was one of the people who was supposed to suggest where the cuts in nursing were to come from. She asked Bernadet out for lunch “and she just started to cry, saying ‘there is nothing wrong with your department, there is no wastage of resources at all, and you’re going to be fired.’” It made Bernadet feel good to know that when they looked for waste, they found none.

After this very turbulent era in BC’s health care history, Bernadet, went to Alberta for one year as the Executive Director of the Alberta Association of Registered Nurses and returned in 1991 to become the Associate Dean of the School of Health Sciences at BCIT until 2002 when she retired. In this position, she was responsible for the administration and educational leadership of the Nursing and the Specialty Nursing Programs, the Biomedical Engineering Technology, the Prosthetics and Orthotics and the Occupational Health and Safety Programs. During her tenure, she introduced the baccalaureate program in nursing.

Bernadet was very active in professional nursing activities for many years. In addition to serving on several RNABC (now CRNBC) committees, she was the president from 1983 to 1985. She was active in the Canadian Nurses Association, the Nurse Administrators Association of BC, the Canadian College of Health Services Executives, and she was on several hospital, university and community committees. She was on the board of BCIT, MDS Metro (now Life Line) and on many regional health board committees.

After her retirement in 2002, she wrote a history of the Nursing Education Council of BC (1972-2000), was a board member and Chair of the Care and Support Services Committee of Yaletown House, served a two year term as President of the Registered Nurses Foundation of BC, and wrote a brief biography of Dr. C.E. McDonnell.

Among her many accomplishments are the development of a nationally recognized department of nursing that was known for its quality of care, innovative approaches and support of staff nurses, extending orientations for newly graduated nursing practitioners, leading a rapid and effective response to the AIDS epidemic in Vancouver, initiating nurse specialty courses that have become part of BCIT’s Specialty Nursing Program, and initiating a Staff Nurses Journal Club for recognition and professional development of senior nurses that celebrated its 20th anniversary in 2001. In 2002 it was renamed the Bernadet Ratsoy Journal Club. The members still meet, and most of the emphasis is now social.

In 2002 she received the RNABC recognition Award for her valuable contributions to the nursing profession in BC and in 2003 Bernadet received the Lifetime Achievement Award from the Health Care Leaders Association of BC.

Bernadet was most proud of her mentorship of other nurses throughout her career. For many years she received cards from nurses who felt that she helped them in some very meaningful way in their working lives. All of her work was directed toward supporting nurses so that they could be better at what they do: “nurses need to be supported and need to have control over the work they do because this has a direct effect on patient care.”

Bernadet died in October, 2009.
Please read her In Memorium story.