Introduction – How It All Began 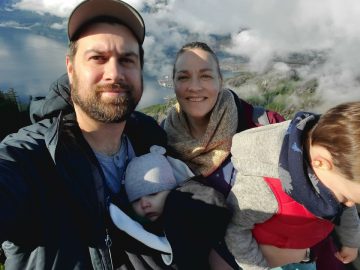 Laurel entered the nursing program at McMaster University in Hamilton, Ontario, graduating in 2005 with her baccalaureate degree. During her undergraduate years, she had the opportunity to work as a nursing research assistant summer student for Dr. Marg Fitch, who is a prominent and highly regarded cancer nursing leader in Canada. During her senior years, she also worked part-time as Dr. Fitch’s program coordinator, solidifying both an interest in oncology and an enthusiasm for research.

Upon graduation, Laurel worked from 2006 to 2010 as a unit nurse in inpatient oncology at the Hospital for Sick Children in Toronto. She also found opportunities to support children with cancer in recreational activities, service on the Board of Camp Big Canoe as medical lead from 2005 to 2009, and working with Camp Oochiheas, an Ontario camp for kids with cancer, as canoe trip nurse each summer from 2008 to 2009.

In 2010, Laurel moved to New Zealand, where she worked in the Pediatric ICU at Starship Children’s Hospital in Auckland. Starship Hospital is the only pediatric ICU for New Zealand and the Pacific Islands, so her three years in that position provided her with opportunities to work with many interesting issues and complex cases. She created an oncology education pathway for pediatric ICU nurses to understand how to best care for an oncology patient within the ICU.

Returning to Canada in 2013, Laurel began her MSN program at the UBC School of Nursing on the strong recommendation of Dr. Fitch, who considered it an excellent career step to do graduate studies at UBC and facilitated a link with Dr. Sally Thorne based on common interests in oncology. Concurrent with her graduate coursework, Laurel also began working in a casual basis as a unit nurse at Canuck Place, which had been established in 1995 as the first free-standing pediatric hospice in North America. She also worked as a part-time clinical coordinator for Camp Goodtimes, a camp for children with cancer operated by the Canadian Cancer Society in BC.

Working with children with serious illness and at the end of life over many years made Laurel particularly interested in the evolving public dialogue that was occurring across Canada during these years with respect to choices at end of life. Knowing that Medical Assistance in Dying was likely to become a legal option in the coming years, Laurel chose to engage in study of the potential implications of this option for “mature minors.” She worked on a graduating project under the supervision of Dr. Sally Thorne on the topic of Anticipating nursing practice implications of medical assistance in dying for minors in Canada: An environmental scan and policy analysis, which was made publicly available in the UBC Library Open Directory.

MAiD was proclaimed into law in Canada as Bill C 14 in June 2016, while Laurel was working on this project; although mature minors were not included in the legislation, it anticipated that this population would require formal consideration at a future date. By the time she graduated in March of 2017, Laurel’s paper had become one of the few written resources on MAiD from a nursing perspective at the time, and therefore created considerable interest across the health sector seeking to understand this new practice option.

Laurel was therefore ideally positioned with expertise when Vancouver Coastal Health initiated its first program for assisted dying in early 2017, starting first as Project Manager, and transitioning into the role of Clinical Nurse Specialist when her MSN completion was confirmed. In this role, among the first such MAiD coordination roles in Canada, she quickly became a model for other health authorities across the country.

In the early years, the program consisted of Laurel and very few MAID Providers and Support Nurses within the health authority. Over time, both the program and Laurel’s role expanded, leading to her assuming in 2019 the role of Director over a staff of eight staff and 22 MAiD providers (physician and nurse practitioner) and 33 support nurses. Taking the Director role allowed Laurel to explore and identify areas within policy, practice standards or operating procedures both within VCH and BC that were acting as an unintentional barrier for patients wanting access to MAID.  Bringing these policies, procedures and processes into a world where MAID is legal has been challenging but Laurel has felt privileged to be involved in understanding this unique and growing area of specialty.

Throughout all of these years, Laurel was widely sought after as a consultant to other health authorities and regions seeking to coordinate MAiD provision within the evolving policy and best practice guidelines, and to consult on research initiatives to better understand the growing phenomenon. She was invited to speak at multiple planning groups and professional practice gatherings, and in 2021 also served as an expert witness for Canada’s Senate when it was debating the changes in the criminal code that were ultimately passed into law in March 2021 as Bill C7. This new bill addressed a perceived inequity in the original legislation limiting MAiD eligibility to those for whom natural death was ‘reasonably foreseeable,’ making way for a second track for those whose grievous and irremediable medical conditions were less predictable but were experiencing intolerable levels of suffering.

Thus, having taken the opportunity to pursue a distinctive area of inquiry arising from her clinical practice, Laurel had found herself positioned to play a meaningful part in shaping the health policy landscape of the country for years to come. She finds it amazing to think of the serendipitous connections in her evolving learning, from a highly supportive undergraduate mentor through to a graduate program that supported her in studying something new and as yet not realized in the practice world. She looks forward to playing an ongoing leadership role in the complex policy, philosophical and relational issues that will continue to be debated and discussed well into the future as Canada rethinks its relationship with the idea of supporting individual autonomy and agency around ending intolerable suffering.