Born in 1939, Sheena obtained her RN diploma at the Royal Victoria Hospital in Montreal and later her baccalaureate degree in nursing from Queen’s University in Kingston. Following an extensive career teaching at Foothills Hospital and Mount Royal College in Calgary, she completed her MSN thesis at the UBC School of Nursing in late 1977 and graduated in 1978. Her thesis, entitled “The effects of a nursing intervention on maternal perception of the infant and postpartum adjustment,” is available in the UBC Library collection: http://resolve.library.ubc.ca/cgi-bin/catsearch?bid=5603.

Immediately upon degree completion, Sheena was appointed to the faculty of the School of Nursing as an Assistant Professor. As a member of the faculty team, she taught basic nursing skills and maternal-child nursing, and conducted research on a number of maternal-infant projects. She was an active member of Canadian Nurses Association, the International Council of Nurses, the Nurses’ Association of the American College of Obstetricians and Gynecologists, and the Canadian Association of University Schools of Nursing. In addition, she collaborated with her husband Park Olaf Davidson, who had been recruited to UBC’s Department of Psychology as a Professor in 1973, and served as the Director of its Graduate Program in Clinical/Community Psychology. Together, they co-authored various scholarly works, including co-editing a major book entitled Behavioral Medicine: Changing Health Lifestyles (1980, Brunner/Mazel, New York).

On December 21st, 1980, Sheena and her family were involved in a horrific automobile accident while en route to Alberta to celebrate Christmas with extended family. Both Sheena and Park were killed instantly, and their three children, Karina, Bruce and Ross, all sustained major injuries. The university community was shocked by the sudden loss of two such impressive faculty members. A memorial service held in the university auditorium attracted 350 people; Sheena’s close colleague and research collaborator at the School of Nursing, Donelda Ellis, delivered a moving eulogy on behalf of the School of Nursing.  In the aftermath, scholarship funds were set up in both of their names by friends and colleagues. 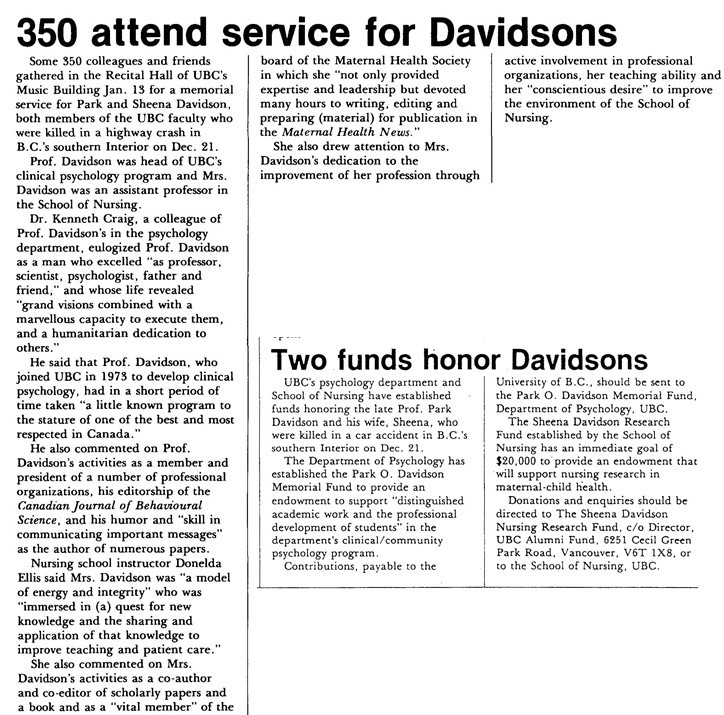 The campus memorial service and the tribute funds were noted in these items from UBC Reports, January and March 1981 editions.

A series of reports in UBC Nursing Today, which was the School newsletter at that time, provided updates on the growing fund, as well as on how Sheena’s children were faring. Notably, in keeping with her record of scholarly excellence, three of Sheena’s papers were published in the year following her death.

On December 21, 1981, it will have been just over one year since the sudden death of our friend and colleague, Sheena Davidson, assistant professor in the School of Nursing. The growth of the Nursing Research Fund established in her name has been gratifying. The current total is just over $8,700 — almost halfway to our goal of $20,000. Donations are much appreciated, as are faculty inquiries about her family.

The children have resumed active physical, social and scholastic lives. Karina has returned for her second year at Queen’s University. Bruce completed Grade 12 and is helping friends in the Cariboo build a barn. In December, he will be having surgery to remove the plates from the long bones of his legs and he discarded his cane months ago. For him, college or university in the Spring Term is a possibility. Ross is fully involved in Grade 12 at school, with sports and in playing his drums.

Grandfather Davidson has taken on the role of both mother and father since Grandmother McGibbon left for her own home in early August. He is carrying out his culinary, handyman and executor responsibilities competently, as well as providing a warm, quiet atmosphere for the children. He feels lonely at times for his friends in Mountainview, Alberta, but is enjoying the opportunity to be with the family. The children have expressed a wish to be at home for Christmas this year and some of their relatives will be joining them here.

Since her death, three of Prof. Davidson’s articles have appeared and a paper she had prepared was read on her behalf at a recent conference in San Francisco.

Additional brochures about the Sheena Davidson Nursing Research Fund are available through the School of Nursing Office. We urge you to pass these along to your friends.

In December, 1980, one of our much loved and respected School of Nursing colleagues was killed, along with her husband, in a motor vehicle accident. The couple left three children. In Sheena Davidson’s memory, the School established the Sheena Davidson Nursing Research Fund and set a goal of $20,000. The fund is administered through the UBC Alumni Association. To date, the capital in the fund has reached $11,665 — more than half way to its goal. Accrued interest amounts to $2,169. Donations continue to come in — a few large ones and some smaller ones from individuals who contribute on a regular basis. However, an increase in the growth rate is needed if the fund is to begin to provide research grants in the near future. Faculty who would like to make a donation to the fund may pick up a brochure from the School of Nursing Office. Donations would be much appreciated.

Roberta Hewat and Donelda Ellis, both of the UBC faculty, are the first winners of the Sheena Davidson Nursing Research Grant. The $2,000 award was announced on March 8, 1985. The title of their proposed study is “A Comparison of the Effectiveness of Two Modes of Breast Hygiene on the Pathogen Content of Expressed Breast Milk.” It will be carried out this summer. The Sheena Davidson Nursing Research Fund was established in memory of a much-loved and respected member of the School of Nursing faculty who was killed in a motor vehicle accident in December 1980. Strong support for the fund was given by the School of Nursing and the Nursing Alumni Division. The fund is administered through the UBC Alumni Division. Last fall the fund reached its goal of $20,000 and interest from this money will be used to finance an annual grant for research in maternal/child nursing and for study of issues related to childbearing or early childrearing periods.

Although Sheena was on faculty for a very short time, she left a lasting legacy, both in her remarkable publication record and in the memories she left among friends and colleagues.

The Sheena Davidson Research Grant continues, after all these years, to fund faculty and graduate student research in the field of childbearing women and their families.