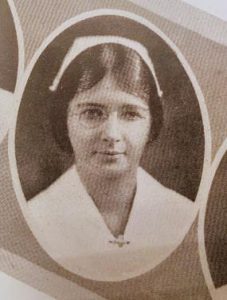 Florence Alfreda Irene Innes graduated in 1926, making her a member of the third graduating class of the School of Nursing’s baccalaureate nursing program and a member of the first class to graduate on the Point Grey campus. In a 1981 interview conducted with Beth McCann (class of 1940), Florence describes the UBC School of Nursing in its earliest days. Quotes from Florence’s interview provide a unique insight into some of the earliest years of the UBC undergraduate nursing program.

Florence joined the UBC School of Nursing in 1921, two years after its inception. Though Florence studied with seven other women, she was one of only three who graduated with a degree in nursing rather than the more popular Public Health Certificate. The UBC School of Nursing was the first nursing degree program in Canada and, in the early 1900s, it was still commonplace for nurses in training to graduate with a public health certificate, thus making degree nurses a novelty in the profession. Florence and her degree program peers – Nora Armstrong and Margaret Kerr – were blazing a trail. 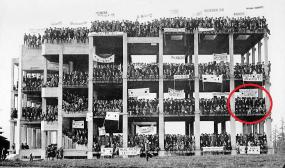 In 1922, Florence’s second year, the famous UBC Great Trek took place. The Great Trek was a march by UBC’s students to protest the cramped conditions of the original Fairview Campus. The Point Grey campus had been planned, approved, and construction had begun years prior, but the project was halted after the outbreak of WWI. Students trekked from the Fairview Campus, down Granville Street, and up to Point Grey. Florence and her classmates “took a streetcar out to Sasamat and trekked from there and practiced songs”. At the semi-constructed UBC Point Grey campus, the protestors clambered onto the rough framework of the Science Building and hung their banners. The nursing students claimed a spot on the second floor and posed alongside the other faculties for photos with their banner reading: “UBC: First University in Brit. Empire to grant degrees” and “ We are the first three women in the British Empire to get degrees in nursing”. Florence and her peers also threw stones that were later used to construct the iconic UBC Cairn. Through this historic trek, UBC students garnered enough support to convince the BC premier to expedite the construction of UBC’s Point Grey campus. After the promise of a new campus sometime in the near future, the students returned to the Fairview Campus and to classes.

Florence and her peers practiced at the Vancouver General Hospital from the beginning of second year in 1921 to the end of third year in 1923. During this time, the nursing students had a chance to work with the Victorian Order of Nurses (VON), an association of nurses founded in the 1890s. Their work with the VON included social service at “the VD clinic, and the TB clinic.” Even with intensive hours of field work, the nursing students still attended lectures such as Ethel Johns’ “lectures in Anatomy… [and] Psychology of Nursing” In her interview, Florence expressed a great admiration for Ethel Johns’ teachings. Johns was “very ins trumental in getting the [nursing] degree course started”, an accomplishment for which she is well-known across the Canadian medical community. In addition to her pivotal role during the early days of the nursing degree program, Johns worked as the superintendent of the Vancouver General Hospital and remained there until the establishment of the degree program. By Florence’s second year, Johns had retired from the hospital and was working “full time at the university”, but she still offered the 1926 cohort lectures during their practical VGH studies. Florence describes Ethel as “an excellent lecturer” and a “very dynamic person… and demanding.” For her part, Florence thrived at UBC, even in such a rigorous environment. In her yearbook her fellow students described her as a “conscientious student, reveling in such difficult subjects as Epidemiology and Vital Statistics” who also took active part in social functions – they even mentioned a rumor going about the school that she was taking secret dancing lessons when she wasn’t busy working and studying. 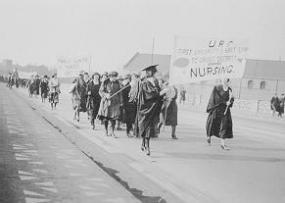 On top of their two years of mandatory field service, at the end of her third year Florence and her peers were “required to serve six weeks in social services and OPD [Out Patient Department]”. After a rough boat ride to Vancouver Island, they arrived in Duncan where they had their second experience with field work. The young nurses stayed in a boarding home and worked within the community before they moved down the island to Saanich where the Health Department was based.

The Point Grey campus was opened for the September of Florence’s fifth year. Despite the 1926/1927 UBC Calendar’s assurances that “ample and spacious quarters of a modern nature [were] provided for the Department of Nursing” Florence described the campus as “so rough… new and rough” during the first year. When they first arrived, nobody helped Florence and the nursing students navigate the new facilities – “[they] just appeared” on campus! The area of the science building which the nurses were allotted was “adequate for the number of students there were at the time”. The nurses were given the fourth floor of the Science Building. The department consisted of one classroom, two offices shared between three people, and one reading room for the students.

At the time, there were three buildings on the campus: the Arts building, the Agriculture and Science building, and the Library. Surrounding these buildings were temporary huts, a cafeteria, and piles of lumber where Florence and her friends used to eat their lunch, weather permitting. Beyond the three buildings, the only thing not under construction on the UBC grounds was “a botanical garden… where they put the huts, and it was very nice”.

The nursing students at the Point Grey campus were busy that year. Florence listed numerous courses, all of which were completed within just two terms. With just one professor, Dr. Sedgewick, they did Practical Sociology, Geography, Anthropology, Motor Mechanics (because “[they] had to learn how to drive a car”), Economics and Social Legislation, Health and Social Legislation for BC Public Health Nursing, Urban and Rural Public Health Nursing, Preventive Medicine, School Nursing, Mental Hygiene, Infant Welfare, TB, Crippled and Deformed Children, Nutrition, Elementary Psychology, and Principles of Teaching. 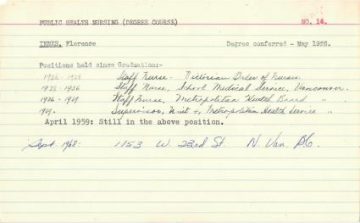 Florence graduated from the five year program with her seven classmates in the spring of 1926. Up until the late ‘50s/early ‘60s, nurses wore their uniforms for their graduation and Florence remembered graduating dressed in “uniform with a gown and mortar top”. Immediately after graduation, the nursing students were expected to find work. That same year, Florence joined the Victorian Order of Nurses as a Staff Nurse and stayed with them for two years.

Sometime after graduating in 1926, Florence Innes and another UBC graduate, Margaret Kerr, took leading roles in creating the ‘Science Girls Club’ – a name that Florence was never too fond of, despite its aptitude. Though the nurses weren’t scientists in the traditional sense, they called themselves the Science Girls Club as the very few women who graduated with degrees that read ‘Applied Science’. At the time, the Science Girls Club was created to connect nursing students across the years. The minute a new student joined the nursing department, they would be a member of the club. Membership continued through all five years of their degree so that all nursing students knew the cohort four years above them and four years below them. In later years the nursing undergraduates became too numerous for the Science Girls to be a community, but it continued to work as a student support body. The Science Girls was the forerunner to the modern Nursing Undergraduate Society (NUS) and the Nursing Alumni Committee. The NUS maintains the Science Girls’ tradition of automatic membership and cross-year solidarity.

Florence passed away in 1993, but her work as a trail-blazing nurse, a participant in the Point Grey Great Trek, and a founding member of the NUS remain visible twenty-five years after her death.

Excerpts from recorded interview by Beth McCann
Photos provided by the UBC Open Library Collection, the NUS Archives, and Ethel Warbinek
Additional information from “Early UBC Nursing Graduates : The Ethel John’s Years 1921 to 1925 : An Annotated List” and “Legacy: History of Nursing Education at the University of British Columbia, 1919-1994” by Glennis Zilm and Ethel Warbinek