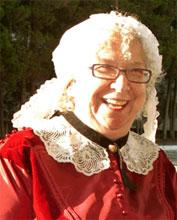 Born in 1938 in North Bay, Ontario, Lois began her nursing career at St Michael’s Hospital in Toronto before moving west. She held many positions at St. Paul’s Hospital throughout her career from Staff Nurse to Patient Care Manager, and worked at both the Vancouver General and the BC Cancer Agency. On the basis of a BA degree, Lois fought her way into the UBC masters program, taking a number of qualifying courses to establish her theoretical grounding within the discipline.

She was eventually admitted to the MSN program and graduated in 1996. Later, she was appointed as an adjunct professor in the School, offering her wise and skilled mentorship to students.

Throughout her career, Lois was an energetic and enthusiastic activist within her professional community. She played a vital role on the St. Paul Hospital’s Ethics Committee, the BC History of Nursing group, the UBC Nursing Xi Eta Chapter, the BCIT Med/Surg Advisory Committee, and the Langara College Holistic Health Program. She was also a dedicated member of the Vancouver Chapter of the Registered Nurses Association of BC, once holding the position of Chapter President, and remaining active in that group long after her “work retirement.” In 1994, she received RNABC’s Award of Honour.