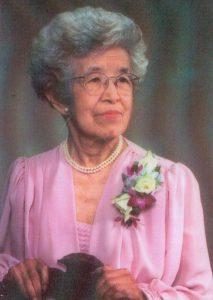 Although she suffered severe discrimination because of her Japanese ancestry, May’s personal drive, can-do attitude, and devote religious beliefs have provided a basis for her positive outlook on life. Her sister and inspiration Yasuko Yamazaki had already graduated from VGH in 1938, received a diploma in PHN from UBC in 1939, and was the first Japanese public health nurse in Vancouver.

While her internment during WWII forced her to leave her nursing training at VGH, Lillian continued to follow in her sister’s footsteps and eventually became one of two Asian-Canadian women accepted for training at Guelph General Hospital. She graduated this program in 1946 and later worked in the Public Health system in Toronto. During this time, she received a diploma in Public Health Nursing (UofT) and continued her education, pursuing and obtaining a BSN (UBC) in 1976. She retired from her position as the Assistant Director of Nursing at the Holy Family Hospital in 1984.

Married to the Reverend Takashi Komiyama, she was also active in the United Church, raising concerns about the acceptance and recognition of all visible minorities. In 1991 she received an honorary Doctor of Divinity from the Vancouver School of Theology at UBC.

Material provided by the BC History of Nursing Society archives http://bcnursinghistory.ca/archives/biographical-files
Edited by Athena Kerins