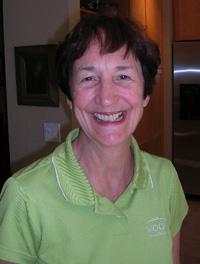 Janet Carpenter is a graduate of the UBC School of Nursing class of 1959. Born in Parry Sound, Ontario she attended Chambly County High School in St. Lambert, Quebec. At university, after considering a career in the French language, she decided to follow in the footsteps of her mother, Margaret Sutherland (BASc(N) ‘31) and had a career as a community health nurse, and of her aunt Helen Carpenter (BSc EdD, Columbia University) who, among many diverse contributions to the health field, served as the Dean of the Faculty of Nursing at the University of Toronto as well as the president of the Canadian Nurses’ Association.

Marrying Max Fleming in 1961, she worked for North Toronto Public Health and the next year as a part-time clinical relief nurse at Montreal Children’s Hospital. After 1963, and with three children, Janet took time from her nursing career to care for her young family. For a brief time in 1969 she worked as a clinical field instructor at the University of Windsor School of Nursing. The Fleming family moved to Vancouver in 1972.

In 1979 Janet attended a refresher course at the British Columbia Institute of Technology. Her first job was with the Registered Nurses’ Association of British Columbia as a project assistant for the 1980 Canadian Nursing Association biennial conference. Following this, she began a career in occupational health nursing, first as a relief nurse at B.C. Hydro in Vancouver. A year later at BC Telephone, with 15, 000 employees, she created presentations on such topics as nutrition, sleep hygiene and shift-work as well as providing on-site medical care. She remained in that position until her retirement in 1998. Since then she has enjoyed travel, bridge, golf, tennis and is working on writing a family story.