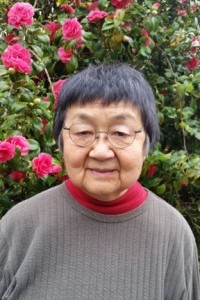 Rose Murakami was born into a family of Japanese Canadian pioneers. Her mother Kimiko Okano Murakami (1904-1997) was the first child of Japanese descent to be born in the fishing community of Steveston, BC. In 1942, Kimiko, husband Katsuyori, and their young family including three year old Rose,were forcibly removed from their Salt Spring Island ancestral farm, separated, and interned in central B.C. for the duration of the Second World War. Kimiko’s strength of character through this painful period in Canadian history was later the subject of a 1997 CBC television documentary. Although they had been reassured by the neighbour serving as the island’s government-appointed “Custodian of Enemy Alien Property” prior to being imprisoned that not a chopstick would be missing from their home until their return, the family received word in 1943 that their property had been auctioned off and sold without their consent.

It took the Murakamis seven years to make their way home, and they were the only Japanese settler family to return to Salt Spring Island after the war. However, they returned to a community that was no longer comfortable with neighbours of the “wrong colour.” Their attempts to acquire new property were challenged by local authorities, and they were informed by an official of the church where several of the Murakami children had been baptized that they were no longer welcome. Said Rose, “To this day, the only time I go to that church is when we have to vote.” And despite no longer holding possession of the old family homestead, they were forced to finish paying off the mortgage on it. Considering themselves honourable people the Murakami parents fulfilled that commitment.

Young Rose Murakami found her way to UBC and graduated with a BSN in 1962. Serving as a clinician lecturer at the School of Nursing during the Evelyn Mallory years, she completed a master’s degree in nursing at McGill University in 1970 and returned to a full-time faculty position. Intensely committed to clinical practice, she maintained a full clinical teaching load, primarily at St. Paul’s Hospital, in addition to her teaching and coordinating activities. She was known for her exceptionally high standards, combined with a supportive manner with students and junior faculty. In 1981, Rose became director of nursing at the Purdy Pavilion for Extended Care at the UBC Health Sciences Centre. Continuing to teach part-time in an adjunct professor capacity, she also acquired a master of science in rehabilitation nursing clinical specialist degree from Boston University, with a minor in gerontology. Although she served for several years as the chief nursing officer at the UBC site after a major hospital merger in the region, Rose’s position was eventually deleted in 1993 and for the remaining years of her professional career, she served as the first consumer relations representative for the Registered Nurses Association of BC.

During the two decades in which Rose was a member of the UBC School of Nursing faculty in various capacities, Rose was an influential presence during a time in which nursing was finding its way out from under medical domination of its education and into an understanding of its own unique contribution to the health of a society. Although she rarely made direct mention of her own family’s wartime experience, its powerful lessons were felt in the classroom by a generation of undergraduate and graduate nursing students in her insistence on clarity of thought, the rigorous analysis of the implications of ideas, and of separating belief from knowledge. Social justice remains a pervasive feature of the curriculum within which UBC nurses learn the profession today.

In 2006, the Salt Spring Island home occupied by the Murakami family since 1954 was destroyed by fire. A widespread public outcry in response to this tragedy made it apparent that the loss was widely felt across the community. Representing a quiet and hopeful protest against an uncomfortable chapter in Canadian history, the Murakami home had been a testament to what Canada can and should stand for. The Murakami family’s gentle but persistent insistence on respect and retribution was viscerally understood as an important reminder that peace and tolerance must be kept alive in the minds of the next generation.

Undaunted for long by the devastating loss of their home and the many artifacts of family history it contained, the remaining Murakami siblings rebuilt their lives once again. In 2008, Rose and her brother Richard presided over the opening of “Murakami Gardens,” an affordable housing complex built on land they had donated to the Salt Spring Island community in honour of their parents.