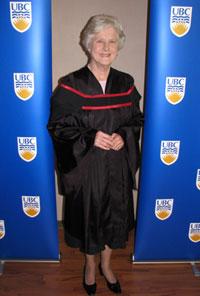 Vivian is a 1952 graduate of the  Vancouver General Hospital and UBC School of Nursing with a BSN. Students went to school at UBC in the huts at that time and there were about five instructors in the School. She chose the education option (the other option was public health) and when she completed her studies, taught anatomy and physiology for five years at Vancouver General Hospital. She loved teaching and is still in touch with some of her students. She had the great privilege of being taught by Helen Mussallem when she was a student. Vivian considers her to be a mentor – a very forward-focused educator who had amazing knowledge and always kept her door open for students. Vivian also remembers the great work of Norman Mackenzie, who was President of UBC at that time. Those were “wonderful times” after the war, when people were coming back to rebuild or start their lives.

She still keeps in touch with her classmates at VGH. There were 13 students in her class when she graduated and when they amalgamated with VGH, there were 72 students. They get together regularly for lunches and some have gone on trips together.

After gradating with her BSN, Vivian spent a year as Assistant Head Nurse and after teaching for five years became a volunteer for many organizations and endeavors. She was active in the Hospital Auxiliary of VGH, working on the membership, shop, and library committees. There, she helped found the Visiting Referral service, which paired volunteer visitors with long-term patients of the hospital. She sat on the VGH Board of Trustees from 1982 to 1991, and as Chairman of the Board for the 1986-7 term. She was the Chair of the Alumni Committee that organized the 75th anniversary of VGH. She is currently Secretary of the VGH Alumni Association.

Now, at the age of 81, Vivian is thinking about slowing down a bit! She has three children; two of them live in the Lower Mainland and one lives in Japan. She has two grandchildren. She likes to walk, has given up tennis but is still curling.