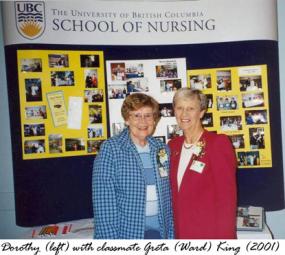 Following graduation she worked for the Victorian Order of Nurses in Victoria, where she grew up, and then on staff and as a Private Duty nurse at Vancouver General Hospital.

After a year travelling in Europe and living in Ottawa, her family returned to Vancouver where she worked for TB Control and then as an Occupational Health Nurse at the BC Telephone Company and then at Woodlands School and Riverview Hospital. In 1972 she joined the North Shore Health Department to pursue her first love, Public Health Nursing, and retired from there in 1989.

Dorothy is Vice-President of the North Shore Safety Council, and since before retirement has actively promoted the Elmer, the Safety Elephant Program presented in schools and preschools in North and West Vancouver.

She enjoys movies, the theatre, Music in the Morning, and travelling. She participates in organizing reunions for the VGH class of September 1950. Next year’s 60th Anniversary celebration is being planned now. She worked with the late Beth McCann and the late Grace “Torchie” Adamson in planning the 60th Anniversary events for the UBC SoN.

She has a daughter and grandson.