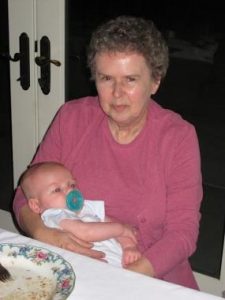 I was born in post-war Copenhagen, Denmark, and rationing was still in place. My mother became an expert at making the most of what was available, including making old clothing over for growing children.

After a year we moved to the Faroe Islands, which was my father’s birthplace, and where he hoped for better job opportunities. My aunt was the district nurse in the village and I saw a role model I wanted to follow. At the age of 2 ½ I decided I wanted to be a district nurse like her. We were on the Faroes for five years, but the jobs didn’t work out and we joined my mother’s family in Canada, emigrating when I was 6.

Mom had emigrated 20 years earlier, finished school in Canada, and served in the RCAF (WD) during the war. My dad was in the Danish merchant navy, sailing under the British flag during the war in the North Atlantic convoys. My parents met and were married in New Brunswick during the war. Mom went back to join him in Denmark in late 1945. We lived in Vancouver, Princeton and Burnaby, and I went to school in each place. I wanted to be a nurse but I also wanted a university education, so I enrolled at UBC in first year science. I was happy to be accepted into nursing the next year for the following four years.

My first year after graduation I worked at Royal Columbian Hospital (1968-1969) in pediatrics and isolation in the old 1914 wing which had been condemned. I remember nursing sailors off the boats in New Westminster and also prisoners from the old BC Penitentiary with hepatitis and other infectious diseases in the isolation ward, where we were locked in and usually alone for the night shift.

From 1969-72 I was at the new UBC Family Practice Unit with classmate Pat (McKay) Charles, developing a nurse practitioner role. It has taken almost another 50 years for that to be recognized as a separate role… Betty Cawston recommended us for that job.

January 1972 to December 1980 I was a Public Health Nurse in Maple Ridge (Central Fraser Valley Health Unit). I started in uniform and we eventually were allowed to wear civvies. I loved the varied nature of the job, the independence, the semi-rural community, and the people with whom I worked. Helen Mussallem’s family lived nearby and whenever she was visiting she would pop into our health unit.

I retired when our first daughter was born.

Since we live in Coquitlam and once our children were in school, I volunteered with the Simon Fraser Health Unit in the schools, doing vision and hearing screening that I used to be paid to do! A result of cutbacks in public health. The nurses loved to have me as their volunteer because I had experience. I also helped with immunization clinics and flu clinics. Later on I ended up nursing sick family members when needed.

I continue to be active in our church and in our local CFUW (Canadian Federation of University Women).

Our nursing class is getting together in May 2018 for our 50th anniversary!