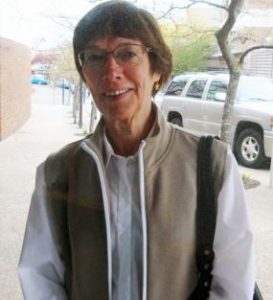 Daryl Giegerich was born in 1935 in Kimberley, British Columbia, where her father was a mining engineer and her mother a teacher. She was the third of four children. After leaving Kimberley High School she enrolled at the University of British Columbia taking two years in the Faculty of Arts before moving to the School of Nursing, the class of 1959. After graduation she nursed in the emergency department at Vancouver General Hospital for a year. She has always considered this an exceptional experience.

In May, 1960 she married Ellis Achtem, who had just graduated from law school. They honeymooned in Las Vegas and San Francisco and then settled in Victoria. Thereafter Dede worked for six months in emergency department at Victoria General. She had thought of working in maternity or pediatrics, but became a stay-at-home mom with the birth of five children in nine years – in 1961 David, now a chef, in 1963 Janice now a teacher with a PhD, in 1964 Paul now in computer science with a middle management government position, in 1966 Leslie now in coronary critical care at St. Pauls’ Hospital, and in 1969 Michael now an engineer with his own company. She became very involved in St. Patrick’s school activities as well as the variety of sports in which the children were engaged. As a family they were avid skiers, and for a few years had a place in Whistler. For many years Dede also played tennis and squash, as well as curling twice a week. She was, and continues to be, an enthusiastic bridge player.

The family spent many summers in a rustic cabin at Qualicum Beach, and in 1990 they built a substantial summer home, which all members of the family enjoy in both summer and winter. It has also been the meeting place for nursing class reunions, as well as a smaller group of Dede’s nursing friends who meet there every summer. The latter group, affectionately known as the “bridge and beer” group, includes Norma Guttormsson, Rosemary Hambrook Lindores, Janet Carpenter Fleming and the late Joyce Gyoba O’Neill.

Dede and her husband have enjoyed wide travel and have visited Italy, France, Germany, Spain, England, Turkey, China, Vietnam, Cambodia, Thailand, Ethiopia and Namibia. In recent years, however, they are content to vacation in Hawaii.