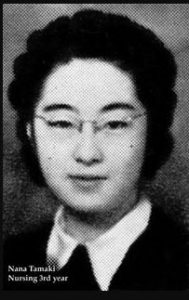 Nana (Yamamoto) Tamaki was among 76 students who received honorary degrees at a special ceremony held during UBC’s 2012 spring congregation to recognize and honour Japanese Canadian students whose university experience was disrupted in 1942. During this dark period during the Second World War, all persons of Japanese descent were uprooted and exiled from the B.C. coast, a violation of their basic citizenship rights. On this 70th anniversary, the University wanted to recognize the injustice they endured and to honor them and their families, welcome them as alumni, and celebrate their contributions as citizens of Canada.

In the May 30, 2012 ceremony, Nana (Yamamoto) Tamaki was awarded a special honorary degree “Inter Silvas Academi Restituere Iustitia” in recognition of the program she was unable to complete. She has since died, but her story was collected by the Japanese Canadian community and the University who used every available strategy to try to locate the students or their families.

Nana Yamamoto Tamaki was a third-year student in 1942, having completed her second year courses at UBC and therefore was presumably at VGH for her clinical years. She was born in Vancouver July 1, 1920, and graduated from King Edward High School. Despite searches by the Japanese Canadian community and the University, little else has come to light so far about her career after she was interned. It is known that she married and that she is deceased.