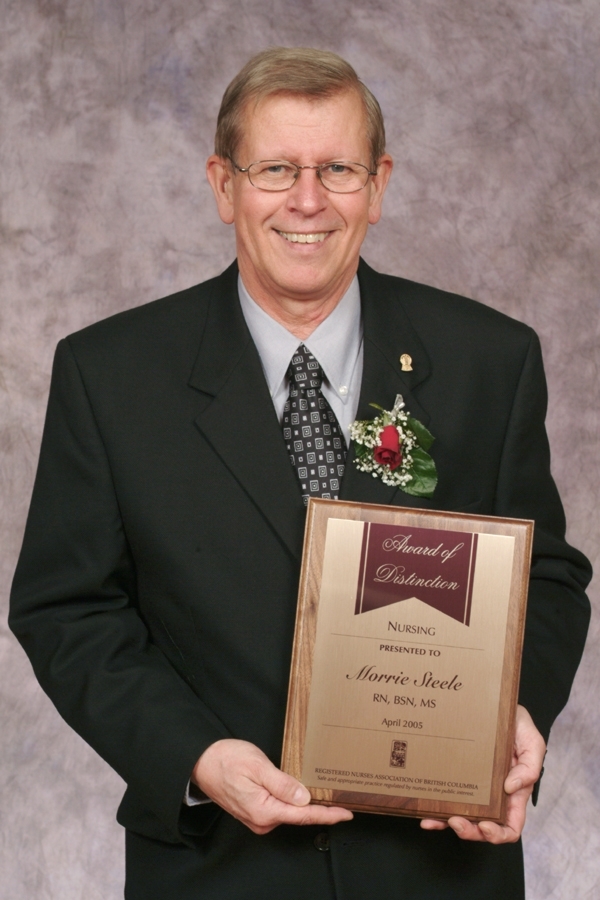 Morrie Steele, BSN, MS, has had a long and very high profile career in British Columbia as one of a very few prominent nursing leaders who have concurrently held registration both as a Registered Nurse and a Registered Psychiatric Nurse. Initially, his choice of profession did not go down well with his family. His mom, a correctional officer in the prison system, and his dad, an electrician with the Department of Highways, wanted Morrie to be the family’s first university graduate. He started at UBC wanting to be a teacher, but stumbled into nursing by happenstance while looking for a summer job near his home in Port Moody. He went to Riverview Hospital (Essondale at that time), and ended up in the wrong building. He filled out an application for the school of psychiatric nursing there, and was accepted. As he later said in an interview with the Canadian Nurse in 2006, “Something just fired a neuron in me. I loved working with people, providing psychosocial support and I loved the camaraderie of working with a team.”

Graduating from the Essondale program in 1965, he worked at Riverview Hospital. Soon he realized that he needed to know more because “There were times, assessing people, when I felt I was missing something.” He enrolled in the British Columbia Institute of Technology (BCIT) General Nursing Program, graduating in 1970 with the Governor General’s Silver Medal for the highest academic standing at the undergraduate level. That same year, his twin sons, Mike and Paul, were born. Continuing to work at Riverview, Morrie progressed from staff nurse to educator, to nurse clinician and then to Head Nurse in the Westlawn Unit, Northlawn Unit and Crease Unit. Included in his roles over that period was a strong component of clinical and educational support for staff in all programs. He expanded his skillset through various Certificate programs in such fields as Nursing Unit Administration and Instructional Techniques.

In 1978, Morrie entered UBC School of Nursing’s “returning RN” program, graduating with his BSN in 1980. While in the BSN program and following, he worked in a wide range of casual positions, including being a clinical instructor at Vancouver Community College and Douglas College, staff nurse in child psychiatry at Vancouver General Hospital, as well as the float pool for psychiatric emergency, psychiatric assessment, psychiatric inpatient units and medical/surgical floors, and he also worked as a casual RN on the psychiatric unit at MSA Hospital in Abbotsford.

From 1980 to 1984, he was Chief Instructor at BCIT’s Psychiatric Nursing Program. The chief instructor position included classroom instruction in psychiatric nursing for acute and continuing treatment settings, and administrative responsibilities for clinical and classroom instruction in geriatric, continuing treatment and acute psychiatric nursing. He was also a member of the departmental administrative committee and sat on the work team that initiated the BCIT advanced nursing diploma program.  From 1984 to 1987, when the province decided to centralize psych nursing programs at Douglas College, Morrie moved there as an Instructor for the first faculty, an as Acting Coordinator for the Curriculum Redesign Project. This role involved the redesign of the general and psychiatric nursing program curricula, as well as classroom teaching, clinical instruction, therapeutic groups, and administrative responsibilities for faculty teaching assignments, student recruitment, curriculum development and implementation. During this period, he also took the Master of Nursing Program at the University of Portland in Oregon, which at that time offered a “Summer Master’s” option designed for nurse educators.

Having whetted his appetite through a term on the Board of Directors for the RNABC (Registered Nurses Association of BC – formerly the combined regulatory body and professional association for nurses in BC), when a Nursing Practice Consultant position became available in 1987, Morrie leapt at the opportunity. In that capacity, Morrie provided confidential consultation to a wide range of nurses, including clinical practitioners, nurse administrators and educators. Although his career focus to this point had been in psychiatric/mental health, surgical and geriatric nursing, he soon developed skill in providing consultation and support to nurses in all practice settings, including community, acute care, rehabilitation and long term care settings. Among the projects he engaged with as part of this role were participating in an ad hoc mental health task committee to prepare a submission to the Ministry of Health regarding the 1997 Mental Health Plan, and the proposed revisions to the BC Mental Health Act.  He was an RNABC appointee to a joint Ministry of Health policy committee and represented RNABC at CNA to revise the 1990 Code of Ethics. He also proposed using the six elements of a profession as a framework for a set of Standards for Nursing Practice which, after extensive provincial consultation, was adopted by the RNABC Board with great excitement, and has informed the practice standards we still use today in the BC College of Nursing Professionals.

Morrie returned to his clinical roots for a time, and spent the first half of 1991 at Lion’s Gate Hospital in North Vancouver as Psychiatric/Mental Health Clinical Nurse Specialist. There he provided expert nursing care to clients of all ages (and their significant others) for psychiatric/mental health issues including substance abuse, pain, trauma, loss and unanticipated medical diagnosis/surgical intervention. Among the initiatives he contributed to were the development and implementation of an emergency response team for non-violent crisis intervention and a hospital-wide alcohol withdrawal protocol. Because of unanticipated changes in the work situation of his longtime partner, Kent Palesch, and the fact that he hated the commute, he then moved to St. Mary’s Hospital in New Westminster, to become Director of Nursing Resources – a position he held for four years. In this role, as an assistant to the Assistant Executive Director, Patient Care, he supported staff nurses, nurse managers and clinical resource nurses to meet the RNABC Standards for Nursing Practice. In addition to serving as a member of various nursing department committees –  including management, education, practice and quality improvement – he worked with multidisciplinary teams to revise the hospital’s consent policy, refine its risk management program, develop an emergency preparedness program and handle consumer complaints. In addition, he provided educational sessions on numerous topics including informed consent, risk management, consumer relations, non-violent crisis intervention and other topics. At St. Mary’s, his biggest challenge was to continue implementing shared governance – a move away from the traditional hospital hierarchy. “It gave power for decision-making to staff nurses, created camaraderie, accountability, responsibility and the feeling of being valued.”

In September of 1995, when his position at St. Mary’s was eliminated, Morrie returned to his former role as Nursing Practice Consultant for the RNABC. In this leadership role, he provided consultation to registered nurses and their employers for legal, ethical and practice issues and supported nurses in all practice settings to meet the Standards for Registered Nursing Practice in British Columbia. He facilitated agency consultation to address system and process issues that affect the work environment and that prevent nurses from practicing safely. He also successfully secured funding from the Ministry of Health to implement and evaluation BC’s “RN First Call” Project implementation and evaluation that I administered. He represented the Association on external committees and at public forums on a local, provincial and national level, including maintaining government relations and coalition building.

“Retiring” from that intensive full-time leadership position in June of 2001, Morrie was quickly recruited into a position as Instructor at the University of the Fraser Valley. Although he anticipated that it would be a casual and part-time activity, it seemed to evolve into yet another full-time career. Among his roles in that position were teaching classroom content in psychiatric/mental health nursing and acute inpatient psychiatric/mental health clinical practice. He served on the Fraser East Ethics Committee and Chaired Nursing Department Research Committee. In 2001, he also participated in the revisions to the 2002 CNA Code of Ethics for Registered Nurses. And when he had spare time, to keep his skills sharp, Morrie continued to practice as a casual nurse on the Chilliwack General Hospital inpatient psychiatric unit.

Partly by virtue of the many roles he has held across a wide range of BC health care institutions, but more meaningfully because of the enormously charismatic and professional manner in which he has fulfilled those roles, Morrie has become one of the most well-known nurses in the province. He is passionately committed to championing the excellent contribution nurses (both RNs and RPNs) make in the domain of mental health in particular, and he has ensured that nursing’s perspective on health and public policy is well appreciated at policy tables. Because he is such an informed and inspirational speaker on the value and relevance of nursing education, he has often been sought out over the years as a guest lecturer and speaker. UBC Nursing Professor Sally Thorne vividly remembers the lectures he would deliver annually for the second year nursing students in the old four-year program. “Having a leader of his stature telling our students that they were the luckiest students in this province, having access to the finest nursing education Canada had to offer was an incredible confidence booster for many weary learners. When Morrie came to the classroom, students inevitably left the class bursting with pride in their profession and their School, and inspired to do their part to advance the profession into the future.” Reflecting back on his career for the Canadian Nurse article in 2006, Morrie mused, “My ancestors would be quite pleased with how my career turned out.”

Morrie’s outstanding contributions to the nursing profession have been recognized by his colleagues with numerous awards over the course of his career as an outstanding health practitioner. Among them, are the Award of Merit, from the Registered Psychiatric Nurses Association of BC (1989), the Award of Excellence in Psychiatric Nursing for Psychiatric Nursing Education & Leadership in Psychiatric Nursing from the College of Registered Psychiatric Nurses of BC (2000), the Award of Distinction in Nursing from the Registered Nurses Association of British Columbia (2005), and the Centennial 100 Award from the Canadian Nurses Association (2008). On December 16, 2019, he was awarded a Lifetime Achievement Award from the Nurses & Nurse Practitioners of British Columbia for the major contribution he made to the profession throughout his career. Sadly, his life partner of over 38 years, Kent Palesch, died of cancer June 26, 2020. Below they are pictured at the NNPBC Awards Ceremony, accompanied by longtime colleague and friend Mary Adlersberg (MSN ’76). 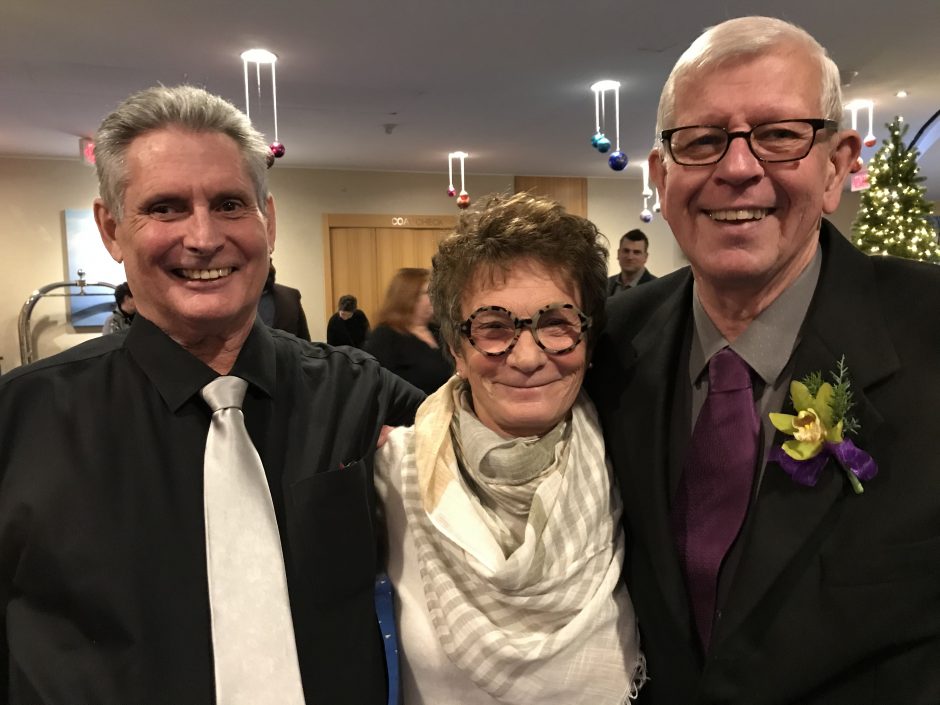 Kent, Mary and Morrie in December 2019