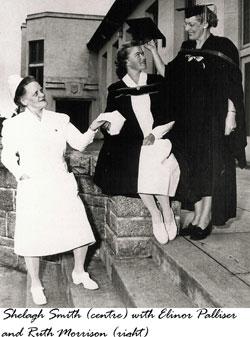 Shelagh knew by the age of eight that she wanted to become a nurse because a good friend of her mother whom she admired greatly was a public health nurse. As she got older, she became aware of the opportunities nursing could offer her, including the satisfaction of a career and the independence that comes with the ability to support oneself.

Shelagh began her Nursing Degree in 1944 when training took six years. She went into the General Program which involved being at UBC for two years, then training at VGH for three years and returning for the final year to UBC. For her last year, she chose the Teaching and Supervision option.

When she first started in 1944, UBC was a very small campus with about 2000 students. In 1945, when war veterans were coming back to school, the student population of UBC grew to 10,000 people and there were army huts all over the campus. The atmosphere changed and changed Shelagh too. For example, whereas before the war ended, tea dances were a common activity on campus, afterwards, she and her fellow students were much more aware of the responsibilities of life and how Canadians had contributed so significantly to the war effort.

Because UBC was smaller than many universities, there were more opportunities to be involved in various aspects of student life. Shelagh played field hockey and was on the executive committee of the Nurses Undergraduate Society. These activities provided her with opportunities for leadership and she learned how to be logical and to be a planner. 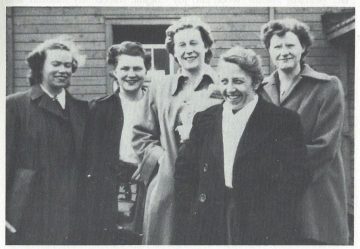 After completing her undergraduate degree, she taught at Montreal General Hospital for two years and for one year in New York City. She had planned to pursue work for the World Health Organization, but fell in love and got married instead! She and her husband Eric moved back to Vancouver where Eric set up a practice in ophthalmology.

Shelagh eventually had four children and she stayed at home to raise them. During all the time she raised her children she was very active in her community. She volunteered for Brownies and Guides, was camp nurse for kids’ camping trips, and was the informal neighbourhood community health consultant!

At the age of fifty, with three children at UBC and one aged 15 in high school, she decided it was a good time to make a life change. She took some refresher courses and then taught as a sessional lecturer in the SoN. She continued on to obtain a Master of Nursing at UBC. Being a mature student was fun – new ideas and time to explore them, the pleasure of hearing “Hi Mom” from one of her children as she studied in the library, and the new status at home as she emerged from chocolate chip cookie baker to fellow student and professional wife and mother.

Shelagh taught in third year Family Nursing for several years, then in first year with beginning students. Teaching was an inspiration to her and it was a privilege to be able to mentor students with whom she could share her knowledge and wisdom of life and community work. Over the years she often met some of her students and once ran into one of them in a quilting store who recognized her voice and approached her saying “Hi, you were my teacher”. 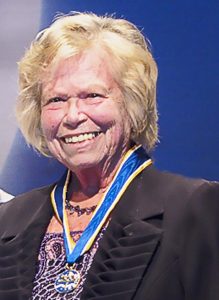 Shelagh on the occasion of being named to the Order of the Diocese of New Westminster (2015).

Shelagh retired in 1992. She loved quilting and belonged to the Vancouver Quilters Guild. She loved to walk, garden, get together with her family, and travel, including a Caribbean cruise with one of her sons, daughter-in-law and grandchildren. They went to the Everglades in Florida, where they saw all the things her young grandchildren loved, including snakes and alligators. She even did some swimming and snorkelling with them. She travelled up the coast with her brother and went fly-fishing in remote BC lakes. She also went to the Grande Canyon with Elderhostel. Although her beloved husband Eric passed away in 2006. Shelagh continued to enjoy a full and happy life, and was incredibly proud of her four children, noting that one was a nurse, another an ophthalmologist, one is a professor of business and one is a chartered accountant. She described all of them as successful and, more importantly, “all of them enjoy their work.” She also had “ten wonderful grandchildren” and considered herself to have had a wonderful life. As she said, “I’ve been lucky.” She was also actively involved in the Anglican Church of Canada, and was recognized in 2015 with the Order of the Diocese of New Westminster. 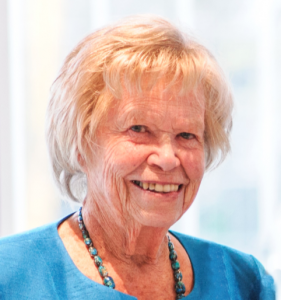 Shelagh on the occasion of being recognized with the UBC Donor Partnership Award (2017).

For many years, Shelagh generously supported a variety of nursing scholarships and funds at the School, and in 2014, she established the Shelagh J Smith Award for Mature Students in Nursing – supporting undergraduate students so that they need not compromise their academic excellence due to financial need. She loved having visits and conversations with the student recipients of her award. In recognition of her ongoing commitment to supporting students in this way, she was recognized with the UBC Nursing Donor Partnership Award in 2017.

Throughout her retirement years, Shelagh was actively involved in any and all alumni events, and was an enthusiastic champion of the School and its vision for nursing. She was honoured a second time, in 2019, with a Centenary Medal to celebrate the School’s 100th anniversary. Living close to campus, Shelagh remained a regular presence at School of Nursing lectures, seminars and events over all of her retirement years, until shortly before her death at the age of 93 on December 27, 2021.