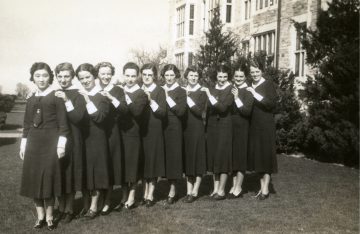 Louise Lore (later Yuen) was the first Chinese nurse to enter the UBC program, completing her public health nursing certificate in 1938. She was also the first Chinese Student (although Canadian born) to graduate from the VGH program, in 1936. She took the public health course at the request of the Vancouver Metropolitan Board of Health (formed in 1936) “because they felt the need for a public health nurse who could speak Chinese fluently (due mostly to the high incidence of TB among Chinese).” (Legacy p. 77)

During the final year on campus, the students also spent rotations in field work, many of which they recalled in alumnae questionnaires. Louise Lore (later Yuen) (BASc(N) 1940) spent her field work experience in Duncan, and she recalled that the Health Department there was housed in an old funeral parlour and she and her classmate were billeted in the “casket room.” (Legacy pp. 83-34)

After she completed the course, she found that Metropolitan Health could not hire her because “the City had an ordinance (or bylaw) against Orientals on the payroll. Special arrangements were made through other organizations for me to work…but paid under a newly formed Chinese Health League. … It was not satisfactory as there was no support from the Chinese Benevolent Association and I was also much underpaid. After two years I left and went back to VGH on general duty.” She eventually returned to Metropolitan Health and was paid by the TB Christmas Seal organization, but her salary remained below that of city public health nurses until 1946, when she finally went on the city payroll at regular pay. Just a few months later she left to be married, and soon took her bachelor of arts degree in the United States. (Legacy p. 77)