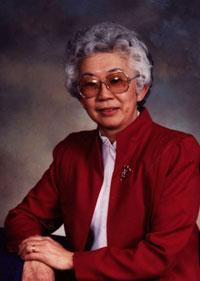 Chiyeko Joyce was born prematurely in St. Paul’s Hospital in Vancouver, BC on June 5, 1936, sister to Toshinori, her older brother. There were seven children in the family. Her parents, Takeo and Masami Gyoba, immigrated to Canada from Japan during the 1930s and lived in a rooming house on Powell Street which her grandparents operated. Although she was a tiny child, she was strong-willed and people often remarked, “Look! That baby can talk!” She was always an intelligent, caring and insightful person and when she went to kindergarten, she decided that she needed an English name, so she chose the name Joyce.

In the late 1930s, her father moved his family to Vancouver Island where her sister, Hiroko, was born. Before starting kindergarten, Joyce chose Elsie as her name. At the outbreak of World War II, the family was forced to leave. Takeo was taken to a road camp and Masami was evacuated to Hastings Park with her three small children. In 1942, the family was reunited in New Denver, BC where another sister, Charlotte, was born. Joyce had many happy memories of her time there, but for her parents, these were very difficult years in the internment camp. Then after the war, Japanese families were forced to either move east or return to Japan. Luckily, the government ruled that they could remain in BC if they stayed outside the 100-mile radius of Vancouver. In 1946, Joyce’s father secured a job at a sawmill in Spuzzum, 125 miles away, and the family settled there. Joyce took Grade 5 by correspondence because Japanese Canadian students were not allowed to attend public school. At age 14, she had to take a year off school to care for her mother, who suffered from complications after childbirth. She took another year of correspondence while helping her father look after her siblings.

Joyce graduated from high school in Hope with sufficient bursaries and scholarships to pay for her education at university. In September 1954, she enrolled at UBC in first year arts and science to begin the five-year nursing degree program. She lived in a private home and worked for the family to earn her room and board. In 1955, she started the BSN program which included 28 months at the Vancouver General Hospital School of Nursing. When she graduated in May 1958, she was awarded The Paediatric Nursing Award. The following year, when she received her degree from the university, the president commended her as the most outstanding student in her class. Joyce provided a powerful role model for her two sisters who realized that going to university was a viable option for them.

Following graduation in October 1959, Joyce joined the BC Public Health Service. Over the years, she worked in Abbotsford, Hope, Kamloops, Salmon Arm and Sicamous. On April 13, 1968, she married Patrick O’Neill and had one child, Brian Tadashi, born in 1969. Joyce and Patrick settled in Salmon Arm where she worked at home until Brian was in high school and then returned to public health nursing. Her full-time homemaker skills included baking bread, buns and her famous apple and lemon pies. Throughout her life, she and Patrick were active in the life and work of St. John’s Anglican Church. Joyce was a founding member of the Hospice Society of Salmon Arm, and also donated many hours to other volunteer services. She had a passion for bridge and was a member of the Salmon Arm duplicate bridge club. She enjoyed badminton, tennis, golf and caring for her Kerry Blue Terriers.

She had exceptionally high standards. Her gentle determination encouraged others to strive to be their very best. She always put others first and was known for her generous spirit, her consideration and her quiet sense of humour. Chiyeko Joyce died of ovarian cancer on November 22, 2001.